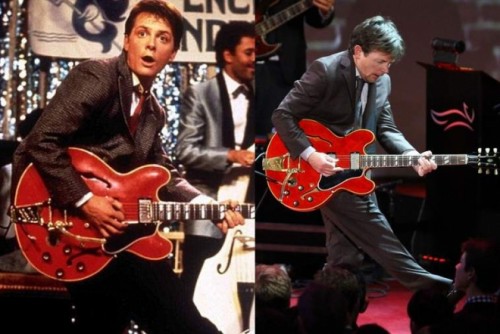 Think back, way back, all the way back…to the future. In this 1985 cult classic, the brave and quick-witted protagonist, Marty McFly, played by Michael J. Fox, essentially founds rock and roll through a cover of legendary guitarist (and actual rock and roll pioneer) Chuck Berry’s “Johnny B. Goode.” Although Fox himself didn’t play the guitar or sing the song in the film, the scene remains one of the movie’s most memorable. And now we’re lucky enough to witness it again. Fox recreated his iconic performance – red guitar and all – at his annual charity benefit in New York City, A Funny Thing Happened On The Way To Cure Parkinson’s.

The long-time actor, who was diagnosed with Parkinson’s back in 1991, held his own on a red Gibson ES-345 electric guitar (according to FilmDrunk) identical to the one he “played” in the film. It sounds as if he’s actually playing this time, but even if he isn’t, he fakes it pretty well. The guy sure knows how to shred (or at least look like he is), even at 50. Watch Fox rock out below!