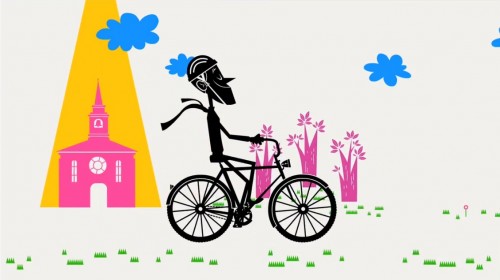 A few weeks ago, we fell in love with Holmes’ drastically reimagined cover of Ice Cube’s “It was a Good Day.” We weren’t the only ones either; one commenter called it potentially “the best rap cover ever.” It served as good incentive to check out his covers album titled – wait for it – Covers. Now we have a second reason: a whimsical video for his version of Queen’s “Bicycle Race.”

Animator Pete Michail, who works on various projects at Cartoon Network, put it together. It’s an adorably literal ride through the song’s lyrics, with Peter Pan, Frankenstein, and Superman – not to mention Darth Vader, who’s never looked so huggable. The clip fits a song that’s equally grounded, as Holmes (Roy Shakked) tells us:

Queen was probably my favorite group when I was a high school freshman. I just couldn’t get enough of those insane vocal harmonies, Freddie’s incredible voice and that awesome Brian May guitar tone. It was grounded in the classical harmonies that I heard on many of my dad’s old Deutsche Grammophone records but it just rocked in a very powerful yet sweet way. As a kid I just took “Bicycle Race” at face value and looked at it as a fun song about bicycles. On second listen though it’s apparent the bike is just a metaphor and the song becomes about escapism and individuality. My version is probably the closest one to the original out of all the songs on this album. I switched May’s guitar solo with some crazy fast synthesizers, imagining a crazy race as I was playing, and tweaked the form just a tiny bit. This was super fun to work on. An ode to an amazing band.

We’re pleased to premiere the video below. Get on your bikes and ride!