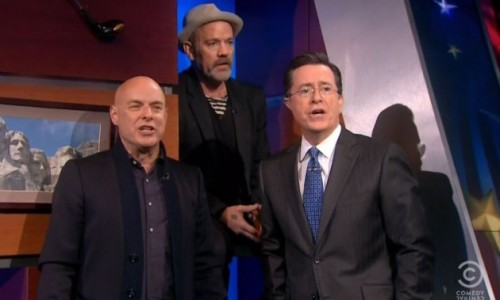 Last night, Brian Eno made his much-publicized appearance on The Colbert Report. As it turned out, though, he wasn’t the only musician in the building. Michael Stipe came out at the end to be permanently installed on Colbert’s new “Rock and Roll Shelf of Fame.” Without R.E.M. to front, he’s gonna have a lot of time on his hands. Eno soon popped back out for a “Lean on Me” sing-along.

What you expect to be a quick comic bit becomes a sincere three-minute a cappella performance. We’re reminded that Stephen has a pretty good singing voice (and Eno too, though he doesn’t use it much these days). Check out the full segment below, shelf-enshrining and all.

Watch the full episode at ColbertNation.com.