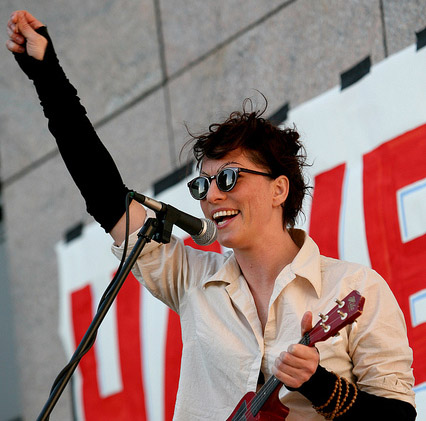 Amanda Palmer has been visiting Occupy sites around the country, performing live for protesters in Los Angeles, Oakland, Portland, Vancouver, and Seattle. She has been doing covers of Lennon’s “Working Class Hero,” Rebecca Black’s “Friday” (in parody form), and old protest songs.

Amanda has teamed up with Boston filmmaker and friend Michael Gill to create a video montage of the national Occupy movement. The film is set to Amanda’s ukulele version of the 1975 Leon Rosselson song “The World Turned Upside Down”, the protest song made popular by Billy Bragg. Watch the vid below and don’t be surprised when Amanda shows up at your local Occupy camp.

For more information on Amanda Palmer visit her website.