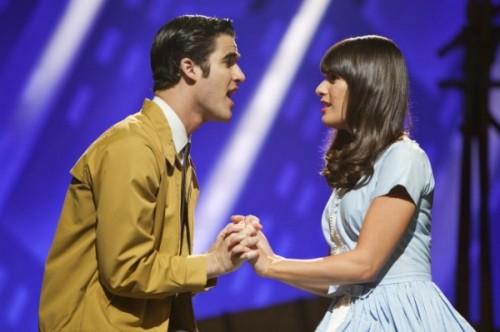 West Side Story‘s over, and I’m not sure how much there’s left to say about McKinley High’s (really professional-looking) production of the classic musical. I’m really surprised this plot sustained itself over five episodes (with its songs making it into three of the last four), but it seems that for now we’ve seen the last of the West Side. Is that a good thing?

And I don’t mean “do we like musicals” – I imagine a lot of you do, and that’s cool. Conventional wisdom would lead us to believe that Glee shares a significant crossover audience with theater geeks, but maybe that audience isn’t as large as one would think. Check out this October 25 report from USA Today on Glee‘s declining popularity. The article notes slipping ratings, a summer concert movie that tanked and tinier iTunes sales as symptoms of Glee‘s moderate slip from the top of the pop culture throne. Of most interest to us, that article’s author asserts that “Slowing music sales reflect the show’s smaller audience and a tilt away from saleable pop music toward Broadway fare.”

In other words, this recent focus on West Side Story might have done Glee’s wallet some quantifiable damage. I wonder if producers and fans feel that’s an acceptable price to pay for the show to exhibit some consistency; sustaining a plot for five whole episodes marks a big change from last year, when we’d be lucky to get a story that lasted for two. Promos for next week’s episode tease a song by Adele, who’s been eminently bankable in 2011, so perhaps that will help Glee get some of its pop mojo back.

Two more general notes on this episode’s music – first, in a pretty big break from last season, did you notice that a whole episode organized around a central theme (losing one’s virginity) has no music explicitly about that topic? Yes, the show connects sexual awakening with the content of West Side Story, but last year the episode certainly would have worked in something akin to “Like a Virgin” or, if they wanted to do back-to-back weeks of Foreigner, “Feels Like the First Time.”

Finally, this episode provided a rare instance of a Glee character listening to music by its original artist and talking about how much he likes it. For whatever reason, we almost never see that in the show, as though these kids exist in something of a musical vacuum where the only thing that anyone listens to is what they sing; one of the only examples I can think of comes in the very first episode, when we learn of Finn’s love for Journey. Here Blaine gives the audience a brief pitch re: the excellence of Roxy Music while we hear one of their jams on his radio. It’s nice for the show to remind us of the context these kids exist in every once in awhile, even if it doesn’t want us to think too hard about it.

Tonight (from West Side Story)
Rachel and Blaine emote ‘til they can emote no more on this lovely ballad. Even though Artie doesn’t feel the passion in their performance, I did. I think the two produce a moving duet that showcases their vocal chops well. In fact, West Side’s Maria provides a nice vehicle for Michele’s vocals in general; the songs seem to fit perfectly in her range, and she delivers them effortlessly.
BONUS: Wait, Glee’s done this song before? Yep, back in the fourth episode of the first season, sung by Tina (Jenna Ushkowitz). It wasn’t as good then.

Uptown Girl (Billy Joel cover)
One of these things is not like the other. In a strange sub-plot to the episode, Blaine revisits Dalton Academy just in time to happen upon his last singing group delivering this classic Billy Joel ode to Christie Brinkley. As usual with Warblers performances, the whole thing’s a cappella, and the arrangement works well. As Sing-Off judge Ben Folds might say, the song features some “sick vocal drumming” and a cool jazzy ending. Though it really doesn’t fit with this episode at all (and the scene’s strangely shot in homage to Joel’s original music video), it’s a solid, high-energy cover all the same.
BONUS: Since nothing else even approaches heavy this week, please enjoy this punk cover courtesy of Me First and the Gimme Gimmes.

A Boy Like That (from West Side Story) / I Have a Love (from West Side Story)
Although Glee doesn’t mash these songs up (as they are sometimes known to do), the show does present them in a similar way. They’re two duets featuring Michele and Santana (Naya Rivera) set against a stark black background, and scenes of the two singing are cut into other thematically relevant moments in the episode. It’s a clever bit of directing on Bradley Buecker’s part, and it leans pretty heavily on subtext for a show that’s usually quite over-the-top and obvious. The singing here’s top-notch, and my love for Rivera’s voice is on record. The actual in-episode performances of these songs are very brief, though; I wonder if fans of West Side Story will feel cheated here.
BONUS: Popular Latina singer Selena recorded “A Boy Like That” for an AIDS Project Los Angeles benefit in 1995; the song ended up making it into the motion picture about Selena’s life.

America (from West Side Story)
Glee turns in a big ensemble production with “America,” though the song’s led mostly by Rivera and Puck (Mark Salling), another singer the show could stand to spotlight more. Some of the put-on Latino/a accents perhaps come off as a bit too tacky (it seems especially strange when the Korean girl does it), but other than that we get a fun performance out of the whole thing. Again, though, I think the real highlight of the performance is its staging; Bradley Buecker outdoes himself here.
BONUS: Prog-rock progenitor Keith Emerson turned in a rockin’ keyboard version of the song on a 1968 recording with his band The Nice.

One Hand, One Heart (from West Side Story)
Just as Rachel and Blaine open the episode, here they close it with another sensitive West Side tune. I didn’t care for this one as much as the first; generally I enjoy Darren Criss, but I feel like he didn’t end up making a terrific Tony. His voice sounds too processed, maybe, or just not quite strong enough for the role. Still, now we can put this whole West Side story behind us.
BONUS: Didn’t think this song could get any more schmaltzy? Well look out, cuz here comes Neil Diamond.