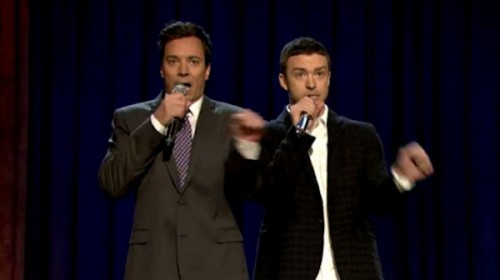 Justin Timberlake appeared on Late Night with Jimmy Fallon over the weekend. As it has twice before (here and here), the occasion necessitated a look at the “History of Rap.” The duo once more busted a move dropping lines from classic hip-hip tracks with the Roots backing.

The shtick is the same as ever, and it’s just as fun. In the post-performance interview they hinted that this would be the final installment in the “History of Rap” trilogy. Watch the performance below, then brush up on the setlist. There’s already a playlist of the originals over at Spotify.

3 Responses to “Watch: Justin Timberlake and Jimmy Fallon Return with “History of Rap 3””