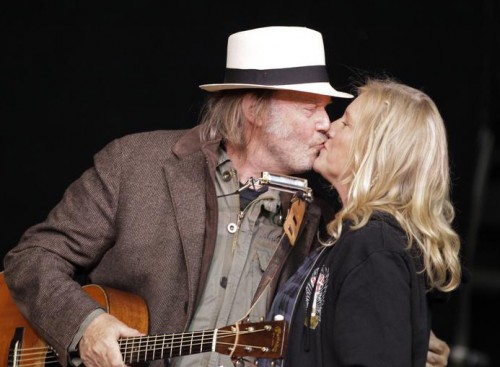 It was early 1986 when Pegi Young told her husband Neil Young that they would need to build a school to suit the special needs of their son, Ben. She then suggested that in order to pay for it, that Neil call his friend Bruce Springsteen and put together a concert to fund it. 25 years later, the Bridge School Benefit concert has become an annual tradition where superstars from all genres of music come to share the gift of music to support this amazing school. The Bridge shows are all acoustic and offer a unique setting where artists can experiment with their material and get the chance to sit in and play with friends and heroes alike.

This year’s Bridge shows featured quite the selection of cover songs, many paying respects to Neil Young by covering his songs and sitting in on a few as a featured guest. The first Young cover was Beck performing “Pocahontas” where Young comes out in the middle of the song to add vocals – and from watching Beck reading from the teleprompter, he needed the help. During Eddie Vedder’s set on Saturday he started to play “Don’t Cry No Tears,” but he screwed up the song and felt awful. Backstage after his set he told Young he was sorry for messing it up, to which Young replied “the only thing you messed up was not inviting me on stage to play it with you.” So on Sunday, Vedder did just that to end his set.

Mumford & Sons put on a high-energy set and invited Young on-stage to join in on Young’s “Dance, Dance, Dance,” a song the band has made part of their live shows over the last year. The last Neil Young cover of the evening was the most fitting, as Arcade Fire asked Young to join them on a beautiful rendition of “Helpless.” As we witnessed a “passing of the Canadian folk/rock torch,” Win Butler of Arcade Fire noted, “We went north and became successful and Neil went south.”

The evening was full of other fantastic acoustic covers, some highlights included: Devendra Banhart opening with the recently deceased Bert Jansch tune “Tell Me What Is True Love;” and Norah Jones with her band The Little Willies covering Ralph Stanley’s “I Worship You,” Hank Williams’  “Lovesick Blues” and the Dolly Parton cover everyone loves to do: “Jolene.”

Eddie Vedder’s set was mostly on the mandolin and ukulele, featuring gems like Steven Van Zandt’s “I Am a Patriot” and a duet with Régine Chassagne of Arcade Fire on “Tonight You Belong To Me,” the popular American song from the ’20s. Beck joined along on vocals on The Everly Brothers’ “Sleepless Nights.”

Dave Matthews & Tim Reynolds provided the best back-to-back cover punch. First jamming out Bob Dylan’s “All Along the Watchtower” with Marcus Mumford, and then bringing out Young to get old-timey on a rocking version of “Oh! Susanna,” the tradition minstrel song written by Stephen Foster in 1848.

Young opened the show with and then closed the concert by inviting all of the performers back on stage to help him and Pegi sing The Youngbloods’ hit “Get Together.” The evening was summed up perfectly as the audience headed out to their cars and the voices were still echoing “everybody get together, try and love one another right now!”

As part of the 25th anniversary, Reprise Records has just released a three-DVD set and a two-CD collection that features many of the artists who’ve performed at the Bridge School Benefit Concerts over the past 25 years. You can support the Bridge School and pick up some great music at iTunes or Amazon.  Enjoy watching many of the cover performances below.

For more information or to donate to the Bridge School visit the website.