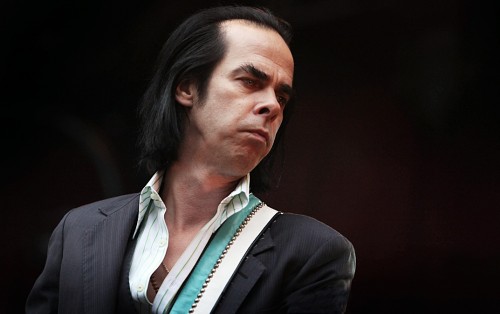 The second of this week’s birthday twofer follows yesterday’s Leonard Cohen feature. There, we heard Nick Cave cover “Avalanche” with the Bad Seeds. Today, Mr. Cave takes a load off while others pay tribute to him. It’s his 54th birthday and, judging by the vital fury of his last few albums, we suspect he’s just getting started.

Cave of course is best known for his work in three groups: The Birthday Party (an appropriate name), Nick Cave and the Bad Seeds, and, most recently, the aforementioned Grinderman. His journey has found him writing post-punk rants, lounge piano ballads, and every possible permutation of sentimental and/or depraved in between. Who else could make a duet with Kylie Minogue cool?

To celebrate Cave’s birthday, we’ve got covers of songs from across his career below. Like Cave himself, they’re all over the place, from chunky acoustic nuggets to roaring electroclash screeds. Happy birthday, Nick Cave!

When he covered Styx at Lollapalooza, the Mountain Goat’s John Darnielle demonstrated yet again that he draws from some unexpected influences. Here, he transforms a sexy post-punk grinder into a churning acoustic performance, yelping and hammering on his guitar like there’s no tomorrow. Which, if you believe Cave at his blackest, there might not be.

With their cover of Rihanna’s “Only Girl (In the World),” Xiu Xiu made the sunny pop song a whole lot darker. Here, they perform the same trick, with one key difference: the song was already pretty dark. Xiu Xiu’s distorted rant, then, becomes something out of Tom Waits’ nightmares.

In 1999, a group of Polish performers came together for a Nick Cave tribute concert and CD. They translated 10 of his songs into Polish and recruited a special guest for two of them: Cave himself, playing off his English lyrics against their translations. In this cover, though, guitarist Maciek Maleñczuk takes Cave’s parts while singer Anna Marie Jopek takes Kylie Minogue’s.

Though generally thought of first as some goth-blues prince, Cave has no shortage of unabashedly sentimental ballads. This has to be one of the most beautiful: Cave’s most wedding-y song. Bird Call’s chirpy (heh) cover doesn’t lay on the sap too thick, letting the lyrics and melody do the heavy emoting.

To many people, Cat’s Eyes may just be a soon-forgotten Horrors side project. This year, though, they’ve delivered three memorable covers, of My Bloody Valentine, Boy George, and Grinderman. The song originally appeared as a screeching blues-rocker on last year’s Grinderman 2, but here they make it slow and sweet. For the first couple minutes at least.

Check out more Nick Cave covers in our archive.