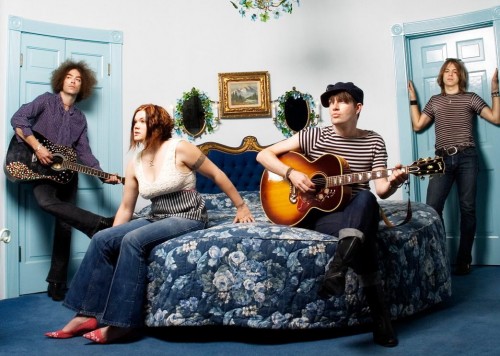 This summer we’ve seen a lot of covers of “Rolling in the Deep.” That makes perfect sense. It’s a hugely popular song that resonated with people on a deeper emotional level than Top 40 tracks often do. However, we’ve also seen quite a few covers of a second song without such an obvious explanation. It’s Bob Dylan’s “You Ain’t Goin’ Nowhere” and, for no reason we can figure, everyone seems to be covering it these days.

We have already heard covers from both Heartless Bastards and the Moondoggies. Now, within the same month, we’ve got a third cover. It’s by the Dandy Warhols, who performed it as part of their new Daytrotter session. The band first released a version as a website-only bonus track for their 2009 album The Dandy Warhols Are Sound. This able alt-country performance gives it a wider outreach, showing their no slacks at back-porch harmonies. Download their new version of “You Ain’t Goin’ Nowhere” below.

Check out more Dandy Warhols at their website or Myspace.