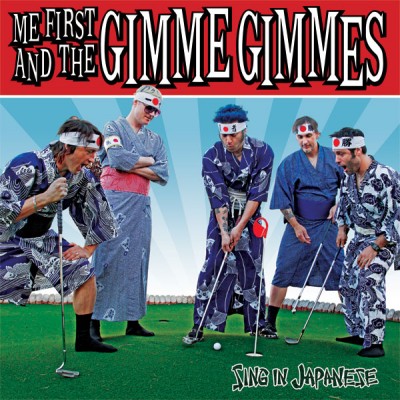 Sing in Japanese is another theme collection from the Gimmes like Go Down Under or Love Their Country, only these songs might be a little more foreign to you (I would say no pun intended, but after I realized that I was about to say it I went ahead and typed it out anyway, so there, cliche). Have you ever heard of Yoshida Takuro? Didn’t think so.

Still, regardless of how familiar you are with the tracklist, a Gimme Gimmes record is always a party in your ears. If you’re preparing for a Mariah Carey cover with the first song on the EP, “Hero,” you’re in for a surprise. The Kai Band, who originally recorded “Hero,” are like a Cheap Trick tribute band with Tokyo Steve Perry on vocals (look at that hair). The Gimme Gimmes, however, have a way of making any piece of music sound like Joey Ramone wrote it. It’s not like “C-C-C” is the kind of song us Americans are too familiar with, but does it really include the intro of “California Uber Alles” before the song starts? Same with “Kekkon Siyouyoi,” an acoustic based love song which now includes the introduction from Social Distortion’s “Story of my Life” before stomping along for another two minutes of palm mutes and melodic backing vocals.

But just like they can inject a multi-colored mohawk in a ’70s pop song, Fat Mike and his usually-Hawaiian shirt-clad group of merry men can un-punk it with the best of them. Take “Linda, Linda” for example; the cover that’s originally the most in the band’s wheelhouse takes a turn and is about as dubbed out as “Guns of Brixton.” Except for a chorus or two where they get as speedy as Jessie Spano on that episode of Saved By The Bell where she freaks out and sings “I’m so excited” a bunch of times to a confused Zack Morris. Adding in the horn section from Mariachi El Bronx and some Elvis Costello organ is just the icing on the cake; or to finish the metaphor, the mullet on the Slater.

Me First and the Gimme Gimmes are the punk rock wedding band no one ever wanted but is ultimately 100% satisfied with. Even if your record collection doesn’t include Minor Threat, you know “Don’t Let the Sun Go Down On Me” and love it regardless of guitar tone. The Gimme Gimmes aren’t important because they’re punk rock royalty; they’d still be as impressive if they were five guys named Bob who all worked in IT together and played a ridiculous amount of fun music together on the weekends. It works because the songs are classic and treated with the proper amount of respect. And the right amount of fun.

Sing in Japanese doesn’t get the benefit of the nostalgia associated with the other Gimmes records–unless you’re that much of a Japanophile, and if so, go back to the manga section of Borders, dork. What Sing in Japanese does have for it, though, is the same infectious sense of hook and melody.

Check out more from Me First and the Gimme Gimmes on MySpace.

2 Responses to “Review: Me First and the Gimme Gimmes, ‘Sing in Japanese’”