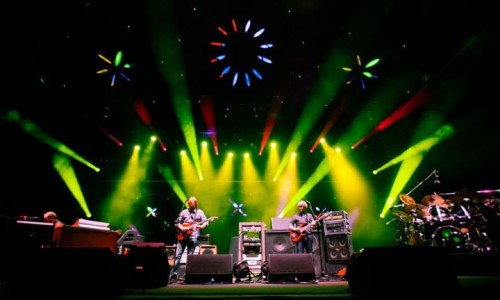 On Sunday night Phish brought their summer tour to a thrilling conclusion with the last of three shows at Dick’s Sporting Goods Park outside of Denver. Trey, Page, Mike and Fish brought out the heavy artillery and some surprises for the tour finale, including especially awesome versions of their songs “Maze,” “Ghost,” and “Bathtub Gin,” as well as a rare cover of the Beatles’ “Come Together,” which the band hasn’t performed since 1995. The covers didn’t stop there though, as the quartet also tackled “The Way It Goes,” a track from bluegrass songwriter Gillian Welch‘s new album The Harrow & The Harvest, which came out barely three months ago.

Initially causing some confusion amongst the phans at the show, who are usually able to identify any song Phish plays in the first few notes, “The Way It Goes” featured bassist and bluegrass enthusiast Mike Gordon on lead vocals. The band stayed generally faithful to the original form of the song, only adding in a few short breaks for solos and adapting it to their instrumental lineup and style. While Mike takes control of the recording with his prominent bassline, Guitarist Trey Anastasio layers on some folk-style guitar picking, Page McConnell adds a jazzy piano solo after the first chorus and Jon Fishman’s tight fills throughout give it some depth and texture. Listen to the track below.

Buy the full set at LivePhish.