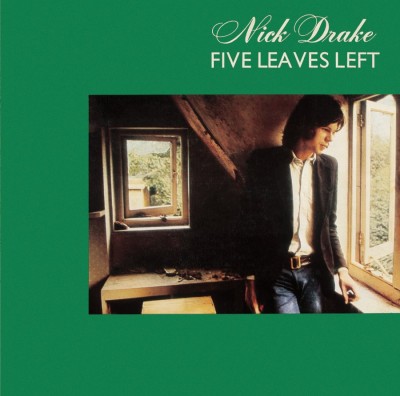 Nick Drake released his first album, Five Leaves Left, five years before his death. Barely out of his teens, Drake wrote almost unnervingly mature songs, and married them with sympathetic backing by members of Fairport Convention and Pentangle, and string arrangements by Robert Kirby, a friend and classmate only two months older than Drake. The album featured some of his most expressive singing and playing, and his songs, so melancholy yet so light, wore their graveness like a black silk cloak. Painfully shy, he refused to tour behind it, and the album was poorly marketed. It was doomed to sink with barely a trace. But oh, that trace…

Forty-two years to the month after its first appearance in record shops, Five Leaves Left has become one of the three legs on the table that bears Nick Drake’s legacy. People are still discovering his work in droves, and finding their way through the sad, beautiful, and timeless atmosphere of that first album. His life and death threatened to overshadow his songs, but in the end they can’t; the songs slip their bonds, affecting people who may know nothing of their creator. It’s ironic that a man who couldn’t bring himself to reach out to an audience in his lifetime has left behind music that continues to do the reaching for him, both in his recordings and in the performances of those who have spread his gospel by covering him. Here are the ten songs of Five Leaves Left, as played by those who were moved enough by them to bring them to us.

The opening song of the original album features the grace notes of Richard Thompson’s guitar; the guitar on Nikki Sudden’s remake is less about grace than menace, sounding like a close relative of Peter Gunn. Sudden sings with the voice of a man who doesn’t understand why time would tell him anything; at the same time, he brings “Time Has Told Me” two things it never had before – sex and danger.

Recorded live at a 1997 Nick Drake tribute concert in St. Ann’s church in Brooklyn, “River Man” features the ethereal strength of Keineg’s vocals, powerful yet delicate, seeping into you so it can chill you from the inside. She won’t make anyone forget Drake, but she will bring his spirit closer, which is a far better thing.

Keith James, a guitarist/engineer/producer who set Frederick Garcia Lorca’s poetry to music and performed concerts focusing on Leonard Cohen’s work, also recorded two albums of Nick Drake covers. His cover of “Three Hours” does a good job at portraying the seeker, wishing to master and be mastered without knowing how or why.

The lushness of Robert Kirby’s orchestration enfolds Drake’s voice – rather than hiding him, it shields him from the knowledge he’s asking to be told and shown. By contrast, Tanja Tzarovska stands before her accompaniment, both of them heavenly in their delicacy, and the song becomes a siren song; the listener is no longer being asked to provide knowledge, but drawn to offer it.

“Day Is Done” has a laid-back kick to it in Hunter’s hands, and Norah Jones’ swaying vocals complement his quartet perfectly. With Drake, there’s more of a sense of a fallen leaf touching down on the grass; now, a warm breeze has sent that leaf spinning across the fields.

The Walkabouts were a Seattle-based Sub Pop band in the early ’90s, but they never deserved the stamp of grunge.  Their music had deeper roots, more inclined toward sorrow than anger. Their cover of “Cello Song” reflects this, replacing the chamber music feel of Drake’s original with a sound more evocative of the Appalachian mountains. It’s still easy to get caught up in the swirls of the strings, and the lyrics retain all their lonesome power.

Eugene Chadbourne’s avant-jazz acoustic guitar playing takes “The Thoughts of Mary Jane” to places Drake could never have imagined. No soft orchestrations here; the guitar sounds like a fly trapped in an overturned glass bowl, frantically bashing around in its futile effort to get out, and the voice is merrily distracted from what it has to share. Drake has never sounded like this, and maybe that’s the point.

“Man in a Shed” is generally considered the weakest track on the original album, but it improves as an instrumental by the Jason Parker Quartet. They recorded their own full-album cover of Five Leaves Left, as we’ve talked about here before. Drake’s somewhat clumsy rhymes and moralizing are left behind, and we can enjoy the JPQ’s flash and dazzle.

Drake’s songs lend themselves naturally to jazz, and this hauntingly prescient song of Drake’s is reborn as a torch song for British jazz pianist John Turville and his trio, with backing guest vocalist Brigitte Beraha. They provide a more contemplative take, more concerned with what’s been lost than what’s about to be.

One of Elton John’s greatest claims to fame is also one of his least known: he was one of the first musicians to cover Nick Drake, recording four of his songs before they had been released. More demos than finished recordings,  it’s still fascinating to hear Elton in the process of finding his voice through someone else’s words. Even without the vibraphone, it’s a nice way to cap off this cover album.

Don’t own the original? Pick up the deluxe edition at iTunes or Amazon. Also, check out more Nick Drake covers in our archive.