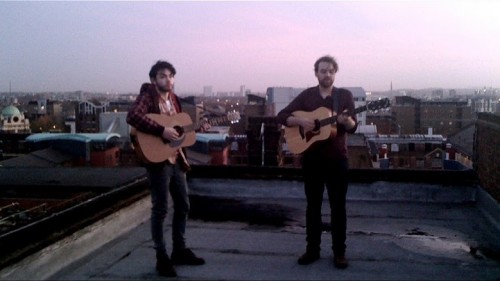 Bruce Springsteen’s “I’m Goin’ Down” is on pace to become one of the most covered tracks in his catalog, amassing quite a number of versions from high-profile artists like Spoon, Florence Welch, and Vampire Weekend. The latest take comes from a collaboration between two Scottish indie musicians, Frightened Rabbit‘s Scott Hutchison and Meursault’s Neil Pennycook. During their acoustic session for Location Music TV, the duo also covered a track from fellow Scot Dan Willson, better known as folk act Withered Hand.

Hutchison takes on vocal duties for “I’m Goin’ Down,” adding a quirky touch to the cover with glimpses of a thick Scottish brogue. The track suffers from some unusual choices in arrangement (one verse is mysteriously missing) and isn’t as strong as Vampire Weekend and Florence’s takes on The Boss. The more successful of the two covers is Withered Hand’s “Red Candle Bulb.” Pennycook leads the way on this track, with Hutchison chiming in for some quiet harmonies. The introspective sound of the original lends itself to the intimate acoustic setting of this session better than Springsteen’s 80s rock. Watch both below: