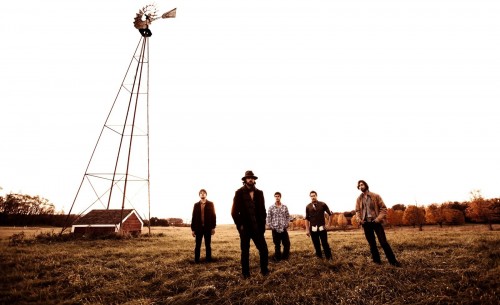 In a project that we’re keeping a close eye on here at Cover Me, Vermont-based folk outfit Chamberlin is putting together an EP of covers that they asked fans to help choose on their website. The voting period ended at the beginning of this week, but you can still check out the contest page to see the eight possible songs, four of which will be chosen for the release. The fruits of their labor are now starting to appear, with their version of Kanye West’s “Lost In The World” hitting the internet this week.

Recorded in the band’s cabin, situated in the middle of now flood-soaked rural Vermont, Chamberlin’s interpretation of Kanye’s epic track follows many of the same patterns as their earlier cover of “Little Secrets” by Passion Pit. Once again the vocals take the spotlight, especially in the a cappella intro. Their vocalist has a strong, rich voice and a solid falsetto, allowing him to replicate Justin Vernon’s “Woods” sample without the original Auto-Tune. They’ve also turned the rap verse into a mid-tempo singable plea. While Kanye’s version centers around dynamics and contrast, Chamberlin smooths it out and gives it a more level, even feel. Listen to and download the track below.