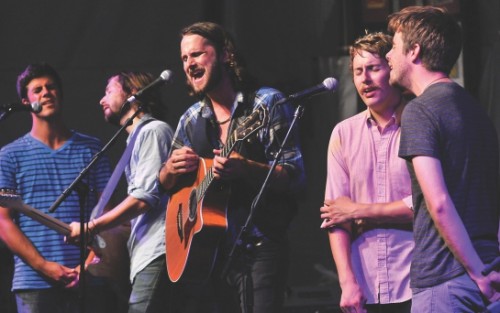 As we’ve mentioned, Vermont locals Chamberlin have been working on an EP of stripped-down covers, involving their fans in the process by holding a contest to choose the tracklist and releasing their versions of Passion Pit’s “Little Secrets” and Kanye West’s “Lost in The World” ahead of time. They’ve just released the finished product for purchase, rounding off the 5-song set with their takes on “Go Outside” by Cults, “Giving Up The Gun” by Vampire Weekend, and “Pumped Up Kicks” by Foster the People. Named the Cabin Covers EP after the rural home where they recorded it, the record has taken on a humanitarian role. Hurricane Irene flooded much of the area around the cabin during the recording process and the band decided to donate all the proceeds from the EP to relief efforts. In true Vermont fashion, you can buy the EP alone or bundled with a pound of dark roast coffee

The new covers follow the simplified, acoustic formula of the tracks we’ve heard already. “Go Outside” (which you can download for free below) starts with the song’s iconic piano line before giving way to the rhythm section, which really drives their version of the song. Chamberlin have proved their vocal prowess already, but this and the Vampire Weekend cover feature the best singing yet. On “Giving Up The Gun” they completely remove all the electronic ornamentation of the original, turning it into an emotional ballad and shifting the focus to the heartbreaking lyrics. This lyrical focus takes over “Pumped Up Kicks” as well, removing the lightheartedness and bringing out the cautionary tale at its heart. Each cover presents an interesting and novel interpretation of the original song, making this a completely worthwhile and enjoyable listen for cover fans. Check out the “Go Outside” download and a full EP stream/purchase below.