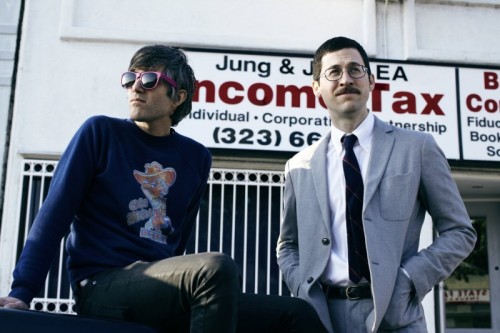 Robert Manning, who has been struggling with Multiple Sclerosis for roughly seven years, came up with an idea to raise money for charities that research the disease. According to Manning’s website, the project is “To get artists I love to record a cover of my song “Washington Parks” all for raising money and awareness for Multiple Sclerosis (the disease) and the MS Society (the charity.)”

So far, Manning’s song has been covered by Ed Harcourt and a pairing of Emmy the Great and Tim Wheeler. Recently, Ash and We Are Scientists teamed up to do the same. The original, which is a slow acoustic tune accompanied by a wistful harmonica, is amped up with fuzzy electric guitar. The bands also make an interesting choice of making it a stereo collaboration; Ash on the left channel, We Are Scientists on the right.

While this cover is best enjoyed with headphones, it is even more enjoyable if you actually purchase the tune and support Manning’s efforts to raise money and awareness for groups such as the MS Society. As of today, Manning has been able to raise over £10,000 for the cause. Stream and buy the track below.

Be sure to read more about Manning’s efforts on his blog and see what both Ash and We Are Scientists are up to on their respective websites.