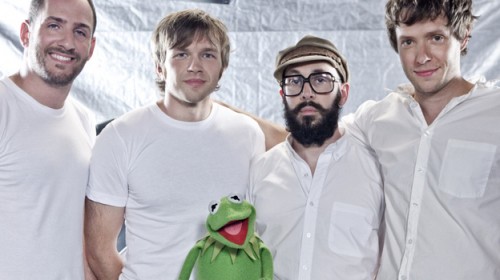 Jim Henson’s Muppets have been spreading silliness for close to 40 years. Cheeky American rockers, OK Go, have only been spreading silliness, largely in viral video form, for about five years. So when veteran, fictional characters team up with the band that leads the industry in goofy music videos to cover “The Muppet Show Theme Song,” expect greatness. The band and the famous fuzzy animals joined forces for the lead track off the Muppets Tribute Album, The Green Album, out today and reviewed this morning.

The song itself is slowed to the point where it’s almost unrecognizable as the upbeat kids’ show theme, and you’ll be on the edge of your seat waiting for the band to kick it into gear (unfortunately, they never really do). You’ll hardly notice the song, though, as the video is dazzling. If you are the least bit familiar with OK Go’s previous videos, you’ll recognize a lot of the sets in this one: treadmills, stacked cups, Rube Goldberg machines, etc. But the addition of your favorite Muppets stomping through the scenes and wreaking havoc, starting with Sweetums and ending with Rowlf the Dog, makes this a madcap video that will have you glued and giggling all the way until the final cut. Scroll down to watch one of the best viral videos of 2011…or you could just watch cat videos.