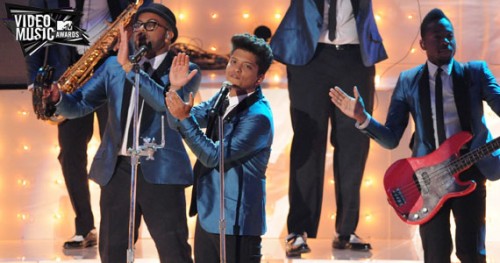 At last night’s MTV Video Music Awards, the specter of Amy Winehouse loomed large. Russell Brand and Tony Bennett (with whom Winehouse recorded her final performance) gave eulogies and Adele, who admits she couldn’t have succeeded without Winehouse coming first, knocked the audience out with a soulful “Someone Like You.” The most official tribute came in the form of Bruno Mars, covering “Valerie” with his suit-wearing, high-stepping soul band.

Winehouse’s “Valerie,” of course, was a cover itself, of the Zutons. The song has become one of her best known, though, so that detail proved irrelevant to Mars’ lively performance. They could have gone a more tear-jerking route, but instead Mars and his band decided to just have a good time in honor of Amy. Watch it below.