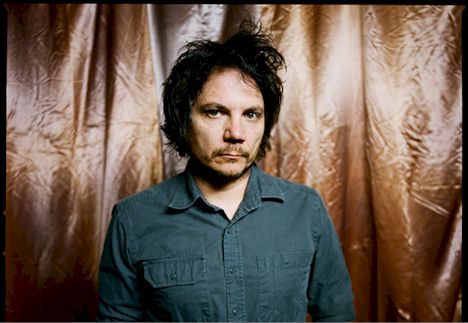 Happy birthday to Wilco’s Jeff Tweedy – born 44 years ago today in Belleville, Illinois. Through his work with Uncle Tupelo and Wilco, Tweedy has laid claim to being this generation’s Woody Guthrie or Neil Young. Wait a minute… Jeff Tweedy is perhaps this generation’s Alex Chilton or John Lennon or even Hank Williams, Sr. You can see the problem in trying to describe a chameleon like Tweedy. It’s why Wilco Nation anxiously awaits each new release; never knowing where Tweedy and the band will take them, but always thoroughly enjoying the journey. That journey continues in a month when Wilco releases The Whole Love, their eighth studio album.

Tweedy met Jay Farrar in high school and in the next few years the weekend gigging and battle of the bands contests evolved into Uncle Tupelo. Tweedy and Farrar fused their reverence for traditional country with their love of ‘80s punk (The Minutemen, Black Flag) to germinate the “No Depression” alt-country revival of the early ‘90s. The two Tupelo founders began to wear on each other, however, and the band soon split with Farrar forming Son Volt and Tweedy rolling the remaining members into Wilco. Wilco’s first release, AM, while sonically similar to Uncle Tupelo, made less of an impact than Son Volt’s debut, Trace, freeing Tweedy to move in much different directions with Being There and subsequent releases.

In addition to the music, Tweedy endears himself to his fan base with his open and honest “rock star next-door” persona. He still lives in Chicagoland with the wife and kids. Tweedy has been up front with his drinking issues and his abuse of prescription painkillers. He’s shared the debilitating effects of his migraine headaches in numerous, patient interviews and we all were invited to watch as Tweedy and Jay Bennett grew painfully estranged during the making of Yankee Hotel Foxtrot. To his fans, Jeff Tweedy is that rare, approachable rock star; a guy you expect to carry his own lunch pail to work every day.

You would think that all that love and devotion along with the influential nature of Uncle Tupelo and Wilco would lead to an excess of tributes and cover versions. Not so. As evidenced by their live sets, Tweedy and Wilco enjoy a good cover as much if not more than most bands do. But spend the better part of a day searching for quality Wilco and Uncle Tupelo covers and you’ll be underwhelmed. Perhaps it’s daunting to try and cover the often complex Wilco song structures, yet even the simpler songs are also underrepresented. Some day in the future we’ll probably enjoy competing Jeff Tweedy tributes (as we currently see with Buddy Holly.) Hopefully we won’t have to wait until Jeff turns 75. Here are a few tunes that you can enjoy right now.

We start with Uncle Tupelo and a cover of a song from their final album, Anodyne. The lazy, banjo-driven “New Madrid” lands in capable hands with Vince Herman’s Great American Taxi covering it on their debut disc. GAT emphasizes the pedal steel on their version and stretches out the song with a piano solo that channels Bill Payne circa “Willin’.”

On Being There, Wilco’s second album, the band clearly demonstrated that they were branching out. So much so that it could not be contained on a single disc. All those different musical styles aside, Being There also showcases another Wilco trait – introspective songs. “Sunken Treasure” is one of those sparse and almost voyeuristically painful to witness songs. Passion Pit’s Ian Hultquist grew up a huge Wilco fan and he covers “Sunken Treasure” with appropriate delicacy.

The Selfish Gene – A Shot In The Arm (Wilco cover)

There is at least one comprehensive Wilco cover collection. A song-for-song tribute to the band’s third album Summerteeth commissioned by music blog Muzzle Of Bees and featuring all artists from Wisconsin. Madison’s The Selfish Gene tackle “A Shot In The Arm,” a lush pop masterpiece that despite its catchy melody is as starkly personal as many of Tweedy’s best songs. The Selfish Gene delivers a very true cover minus some of the Wilco studio pyrotechnics that are difficult to replicate.

We’ll close with a couple selections from Yankee Hotel Foxtrot, which for many fans of Wilco is the band’s creative zenith. Jazz trio The Bad Plus added vocalist Wendy Lewis for their 2008 all-covers album For All I Care. Lewis starts and finishes the song “Radio Cure” in strong fashion and makes way for some jazz fills that are as esoteric as many of Wilco’s studio “tricks.” Then Lewis returns to deliver the song’s key conclusion “distance has no way of making love understandable” as if she’s pondered that very fact for a very long time.

J.C. Brooks and the Uptown Sound – I Am Trying To Break Your Heart (Wilco cover)

Our final cover is one of the all-time great song re-works. Of all of the collective effort that fans and rock critics alike have spent trying to deconstruct “I Am Trying To Break Your Heart,” likely no one ever heard it as a potential dance floor explosion complete with horns and hand claps. No one except for Chicago’s J.C. Brooks and the Uptown Sound. We don’t know if this idea came in a dream or if this musical alchemist purposefully set out to turn ambient lead into soulful gold. The result was one of the most unexpected and fun covers of last year.

Check out more from Jeff Tweedy at this fine Uncle Tupelo fan site or over at Wilco World.

4 Responses to “They Say It’s Your Birthday: Jeff Tweedy”