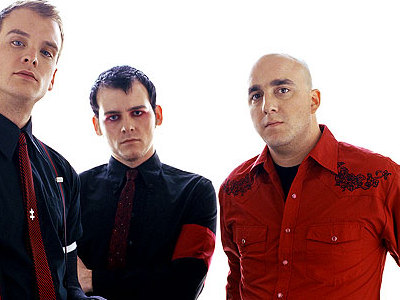 Since 1996, Illinois punk outfit Alkaline Trio has been known for its aggressive, yet emotional brand of pop punk music, which has been cherished and loved by many. Recently, 39 different pop punk artists got together to show their appreciation and love for the band with the release of A Tribute to Alkaline Trio (out on Pacific Ridge Records on August 30). The roster of bands on the album includes San Diego pop band The Material, Ace Enders’ (of the Early November) side project I Can Make a Mess Like Nobody’s Business, Pennsylvania pop punk band Punchline, and many more.

A few tracks from the album have been released early for fans to listen, including covers by Chicago punk emo band Into It. Over It., San Diego’s The Material, and Pennsylvania folk/post-punk artist Koji. The Material’s cover of 1999’s “Bleeder” (which you can download below) shows a more polished, poppy take on the band’s track of heartbreak – as well as a rare female perspective on the band – where as Into It. Over It.’s beautiful minimalist cover (stream it below) of the 1996 favorite “Message from Kathlene” offers a simple take on the love song. A lovely acoustic cover of 2000’s “She Took Him to the Lake” by Koji is available on the artist’s Facebook.

Into It. Over It. – Message from Kathleen (Alkaline Trio cover)

More info about the 2 CD tribute album and the track listing (as well as bonus tracks by Philadelphia’s The Wonder Years and guitarist Matt Brasch) are available on the Pacific Ridge label site here.The album will be available for download digitally on the 30th.