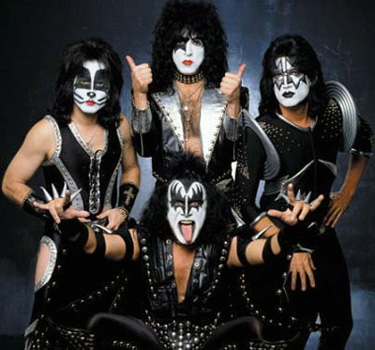 In some respects, KISS embodies the quintessential American band, or at least the quintessential American four-piece rock group. You can take that assertion a number of ways, depending on how cynical you’re feeling. Perhaps if you’re not particularly a fan of the group – like many critics these days, one might guess – you could argue that their crass and unending commercialism speaks to American values in a way that no other act has mastered so purely. But that would miss two important points about this New York City foursome: one, that they’re a seriously important group that had a huge effect on the music industry and culture in general, and two, that a lot of their music rocks really, really hard.

That said, KISS has certainly busied themselves molding a consistent and marketable image. As such, covers never played much of a role for the group, certainly not in a live setting – KISS tends to keep their tour setlists relatively constant and calculated, leaving surprises to a minimum. Their recorded output, though, contains a few unique tributes to groups that the lads in KISS would’ve listened to in their formative years. Often, they recast these songs in a totally KISS mold, almost obliterating any sense of the original. If we were pun-inclined we might call this “revisionist KISS-story.” Any cover that KISS touches gets subsumed into their catalog – looking at the tracks below, at least three of them are more associated with KISS than with their original artists, and that’s surely the way Paul Stanley, Gene Simmons and the other two rotating guys want it.

In 1974 KISS remade this 1959 feel-good ditty as a “Dancing in the Street”-style partier, down to Paul Stanley’s opening call for various cities around the U.S. to “put their two lips together and kiss!” Here we get an early lesson in branding from the KISS boys. What was originally a song about making out with your girl is now, ostensibly, about this very band – it’s time for the nation to get KISSed! Yet, interestingly, the band didn’t want to put this song on their first record. It was added to later pressings of the album at the behest of the band’s label after initial sales were grim; executives felt that a catchy single could give the record some heat. Their plan worked, but not very well; KISS’ version of this song hit number 83 on the charts, not exactly a stunning accomplishment. It did, however, give KISS their first appearance on the pop charts, as well as a clever way to spread around their name. “Who does that song about kissing?” “Oh, um… KISS.”

KISS – Then (S)he Kissed Me (The Crystals cover)

1977’s Love Gun saw KISS continuing the trend of covering pop hits with the word “kiss” in the title. This one gets a gender reworking from Paul Stanley, a not-uncommon move when it comes to this song’s covers (even Springsteen has done it). Producer Eddie Kramer makes some unconventional decisions here, like making the song’s bass tone so fat and sloppy that it ends up emulating the original’s low brass, or using decidedly non-rocking castanets as the song’s primary percussion. Though this track clearly belongs to the rock genre, it’s among the more poppy offerings from the group. That may be due to singer Stanley, who, it’s said, always worked at cultivating a more glamorous persona – he wasn’t called the Starchild for nothing.

In 1978, the members of KISS did something not even the four Beatles had: they simultaneously released four solo albums meant to both cement and spotlight the personas of the individual band members. Surprisingly, lead guitarist and seldom-singing Ace Frehley’s record produced the most successful single, a cover of a 1975 song recorded by British glam band Hello. An actual New York boy, Frehley finds more success with the song, amping up the “groove” that the original somewhat lacks, title notwithstanding. Frehley’s version continues to make pop culture rounds today, most recently becoming the theme song to TLC’s series NY Ink. Fun trivia: Frehley once told Rolling Stone he was inspired to cover this song based on experiences with prostitutes in Times Square.

Perhaps encouraged by the success of “New York Groove,” Frehley started to take more lead vocal duties on KISS’ next record, the much-maligned Dynasty. Despite its generally being considered a disco record (due mostly to lead single “I Was Made for Lovin’ You”), you couldn’t tell from this Stones cover, the record’s second track. Frehley totally rocks it here, turning in a KISS classic that became one of the Spaceman’s signature numbers. The Stones’ original tune comes from the controversial Their Satanic Majesties Request, an album many have understandably derided as a tepid Sgt. Pepper rip-off – much like “Getting Better,” “2000 Man” even includes casual references to spousal abuse. Frehley and the rest of KISS make the track actually listenable – where Jagger and Richards’ version is full of weird instrumentation and random, frantic tempo changes, KISS just rocks.

Most right-thinking people probably associate this song, a cover of a 1973 hippie-ish ballad, with the film Bill & Ted’s Excellent Adventure. However, there’s some surprising emotional motivation behind KISS’ recording of it, too – Gene Simmons said on VH1 Classic that it was also meant to be a tribute to the recently deceased Eric Carr, the drummer who’d replaced Peter Criss in 1980. Here we have another example where it could be argued KISS exceeds the original recording – they remove some of the more dated “peace and love” lyrics from Argent’s take and give the song about ten times more oomph. Besides, have you ever seen Argent? They’re a really lame-looking band. The guys in KISS could take them any day.

Check out more from KISS on their official website.

2 Responses to “In the Spotlight: KISS”