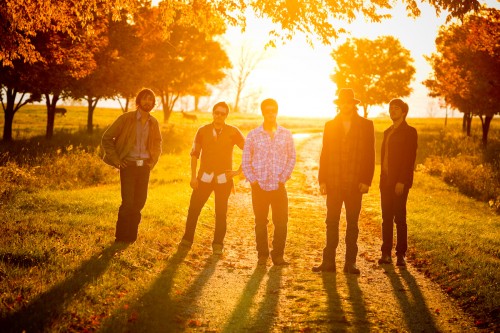 Based out of a cabin in Goshen, VT, roots-rockers Chamberlin are undertaking a new project that will eventually lead to an EP of covers, and with the help of a few prize-providing sponsors they’ve turned the process of song selection into a contest for their fans. On the website devoted to the contest, fans are invited to pick four songs (out of eight choices) to be recorded in the band’s unique style for the EP. The choices skew towards the Indie rock scene, with songs by Beach House, Vampire Weekend, Neon Indian, and Peter Bjorn and John, as well as Kanye West and Bon Iver’s “Lost in The World” and Foster The People’s summer hit “Pumped Up Kicks.” Simply voting in the contest wins you a digital copy of the finished EP and a download of the band’s current single, which definitely seems worth the twenty seconds it takes to participate.

As an introduction to the project and their style, the band released their version of Passion Pit‘s “Little Secrets” on their website along with an accompanying video on YouTube. While they preserve some of the key elements of the original, namely little hints of Michael Angelakos-style falsetto, Chamberlin makes it their own with sparkling acoustic guitars and a much clearer, more natural sounding vocal delivery. The video also offers some spectacular views of the Vermont landscape and a few shots of the singer’s interesting, probably custom, acoustic-shaped guitar with pickups characteristic of a solidbody electric. Watch the video below.