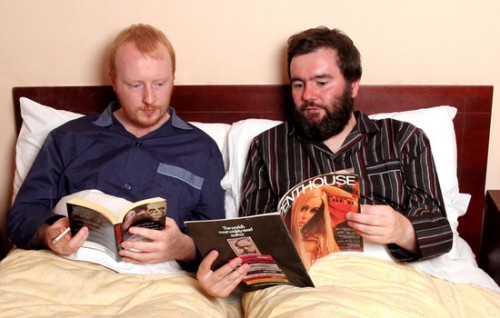 With the release of their 2009 album, Yeah So, Sheffield, England duo Slow Club (aka Charles Watson and Rebecca Taylor) took the folk world by storm with their lovely perspective on relationships encompassed in an inventive package. The band’s love songs, such as “When I Go” and “Let’s Fall Back in Love,” were made even more beautiful with the use of percussion like glass bottles and chairs, and through the band’s cute, but not too sugary songwriting. Now the duo is back with a new album, Paradise, which includes a really different (and funky) new track, “Two Cousins.”

The song, (which has a brilliant video), has a choir-like quality, but also a funky groove-worthy element to it that Slow Club hasn’t showcased before. Scottish favorites Aidan Moffat and Malcolm Middleton of indie rock band Arab Strap took it in a new direction. It’s not officially an Arab Strap reunion; more like, as Moffat puts it, “an extremely accurate tribute band.” Their cover takes the melancholy undertones of the original and makes them larger than life. Moffat’s deep voice projects a sadness like no other, spinning the once boppy and upbeat (yet quietly sad) track into an electro-infused portrait of heartbreak and ruin. (via The Quietus)