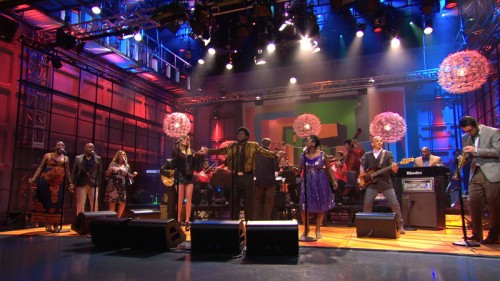 Yesterday we saw Grace Potter and Sharon Jones roar through an Otis Redding song, and last night, as promised, they returned with another cover. This time they took their duet to The Tonight Show with Jay Leno to promote a charity concert organized by Tonight Show bandleader Rickey Minor. Jones’ Daptones peer Charles Bradley joins in this time, as does the Youth Orchestra of Los Angeles.

The all-star collective wail through Marvin Gaye’s “What’s Going On.” Potter and Jones may be bigger names, but Bradley near steals the show with a grittier, less theatrical performance. The man has been on a covers roll recently, first with Neil Young’s “Heart of Gold,” then with Nirvana’s “Stay Away.” We sure hope he doesn’t stop soon. Check out “What’s Going On” below (non-U.S. residents can watch here).