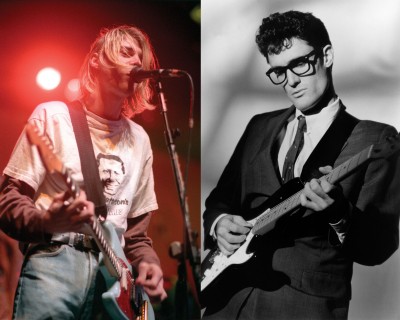 When it rains, it pours. It seems like half of our posts in May/June detailed song releases leading up to the Rave On Buddy Holly tribute album. On June 25th it came out, we reviewed it, and we figured we could let our Round-the-Clock Buddy Holly Tribute Coverage News Team go. Well, looks like we’ll have to hire them back again, because now there’s another all-star Buddy Holly tribute album in the works. It’s called Listen to Me: Buddy Holly and includes contributions from Brian Wilson, Lyle Lovett, Stevie Nicks, Ringo Starr, and Zooey Deschanel, who, amusingly, also appeared on the other tribute. Rolling Stone has a teaser video for the album here. No tracklist has been announced, but the album comes out September 6th. If it rolls out anything like the last one, expect hourly updates on its progress.

In other tribute copycat news, Nirvana’s Nevermind will get its second 20th birthday tribute (following SPIN’s) on October 11th. This one comes from Reimagine Music, who are on a roll following their tributes to the Rolling Stones and Dylan’s Bringing It All Back Home. The album Come As You Are features harder rockers Murder by Death, mewithoutYou, Maps and Atlases, and more. Check out the tracklist below.