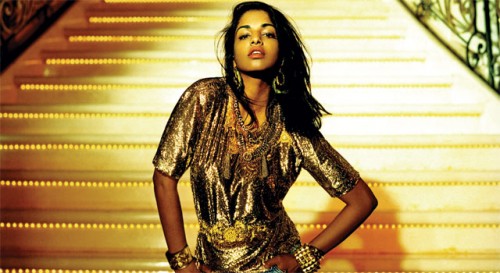 Artist, activist and new media pioneer Maya Arulpragasam, better known to the world as M.I.A., turns 36 today. A Briton of Tamil descent, she started as a visual artist, attending London’s Central Saint Martins College of Art and Design. While there, she met Elastica’s Justine Frischmann and designed the cover art for their final single. Urged on by Frischmann and Peaches, whom she met while filming a video document of Elastica’s last tour, she began recording music in her bedroom.

She quickly gained an underground following, primarily due to file sharing and internet buzz – common now, but a relatively new way of building a career in the mid-’00s. Critical acclaim followed the release of her first two albums, and she made several high-profile appearances, including a slot at Coachella in 2009, replacing Amy Winehouse. Though her third album has faced a more divided critical appraisal, she continues to push the musical envelope and is reportedly working on her fourth. But, for now, sit back, relax, and enjoy these five covers of her work that we’ve compiled to celebrate M.I.A.

Originally included on her first demo tape, “Galang” went on to become M.I.A.’s breakthrough track, first as an underground hit and then as a single from her debut album Arular. Here London-based Trinidadian rock n punker Dana Jade reworks M.I.A.’s electro-dancehall into a track that would sound at home on any Gossip album.

The triple platinum-selling “Paper Planes” off of 2007’s Kala stands as M.I.A.’s most successful track, even garnering a Grammy nomination. Pale Young Gentlemen give the song an orchestral-folk makeover with a deceptively simple arrangement. M.I.A.’s unique combination vocal and percussion chorus translates surprisingly well in this setting.

Indie popsters of Montreal tackle the Bollywood-meets-disco track “Jimmy” next. They slow the track down, but keep many of the features of the original that caught our ears in the first place, including translating the distinctive Bollywood string sample to keyboard. Overall, their approach gives the track a more smooth, psychedelic feel.

Unrelenting and in your face, and with a controversial video to boot, “Born Free” divided critics when released as the first single from Maya. New York-based Richie Follin, brother of Cults’ Madeline Follin, records under the name Guards and describes himself as “pop-wave-doom” on his Bandcamp page. He turns the track into an echo-laden, noise pop masterpiece featuring raucous drumming and huge sounding guitars.

If you look up M.I.A. covers, you’ll find a whole lot of versions of “Paper Planes” and not much else. So we threw in another one for you. Hailing from Arizona, pop-punk band This Century recently released their debut album, Sound of Fire. In the lead-up to that release, they recorded this rather cute version of the song that could easily soundtrack the summer for 14-year olds everywhere.