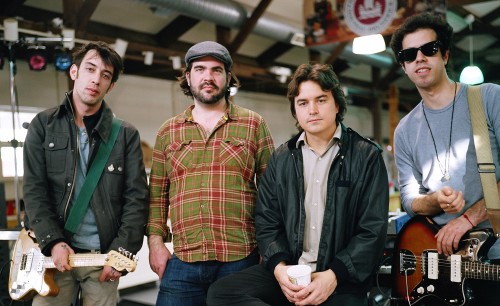 Canadian rockers Wolf Parade performed their final show on Monday night at the Commodore Ballroom in Vancouver, and as their final goodbye, the band returned for a second encore and performed, in the words of keyboard and vocalist Spencer Krug, “a shitty cover song.” Their appropriately melodramatic selection was Bob Dylan’s oft-covered “Knockin’ On Heaven’s Door,” which quickly became a group sing-along. Hey, at least they didn’t play “Freebird.”

As the video shows, the band invited the audience up onto the stage to sway and sing, creating a communal farewell. The band themselves only sing the first verse of the song, turning the mic over to a female fan for the rest. Having the crowd onstage always creates an interesting dynamic, with some audience members struggling to quell their exuberance over close contact with the band, forgetting the mournful context. The band and most of the audience compose themselves though, and even though the cover isn’t especially interesting musically it stands as a fitting final gesture for an obviously-loved band. Watch the video below.

Check out more from the late Wolf Parade on their Myspace page.