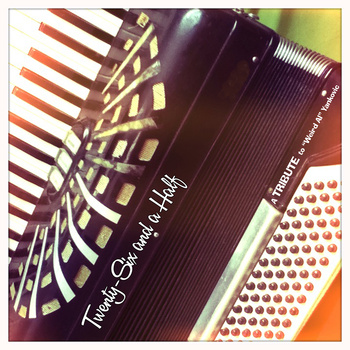 So far, 2011 has been a pretty good year for “Weird Al” Yankovic. After a heavily publicized semi-battle with Lady Gaga, Alpocalypse, his first record in five years, will see release next week. Right now, though, die-hard Al-oholics can enjoy another new album thanks to music site Bandcamp – a tribute to the Monster of Mock known as Twenty-Six and a Half.

As much as Yankovic’s known for his parodies, the tracks on Twenty-Six and a Half mostly forego the reworked pop songs. Only three parody tributes pop up here – a forgettable, chill “Can’t Watch This” from MC Lars, a relatively straight cover of rarity “Pac-Man” (The Beatles’ “Tax Man”) from Nuclear Bubble Wrap, and a revelatory electronic version of “I Lost on Jeopardy” via nerd-lebrity mc chris. The latter makes me think that some intrepid cover artists out there should reverse-engineer chris’ track to get a really cool cover of Greg Kihn’s original number (“Jeopardy”), but I digress.

Most of the rest of Twenty-Six and a Half finds a bevy of artists paying tribute to Al’s original, arguably under-appreciated material. Some, like Steve Goodie, opt to play things relatively straight – he turns in a rocking but faithful version of “Everything You Know Is Wrong,” the They Might Be Giants “style parody” from 1996’s Bad Hair Day. Others play with Al’s formula, altering his songs to make them sound like the products of other artists. This site’s already covered the brilliant Gaga-style “That Boy Could Dance” from Insane Ian. Another winner: Raymond and Scum make a Weezer-esque retro-ballad out of “One More Minute.” I think the best track to make use of that formula here is Dino-Mike’s “You Make Me.” A track that once aped Oingo-Boingo’s frantic new wave style now takes the form of a mega-serious early 2000s acoustic ballad ala Nickelback or Staind. Dino-Mike’s instrumentation is instantly hilarious; earnestly marrying it to Al’s silly lyrics produces the best musical comedy on the record.

The real surprise of Twenty-Six and a Half, though, comes from the few songs where artists totally hone in on Al’s parody territory, rewriting his own lyrics. One in particular stands out; the aforementioned Steve Goodie contributes to the album a second time with a mockery of 2003’s “Hardware Store” that becomes the Harry Potter-themed “Dumbledore.” The track’s funny in its own right, but what really impresses are the lengths Goodie goes through to recreate Al’s incredibly intricate vocal harmonies that give “Hardware Store” its signature sound. This is no amateur recording. “Dumbledore” alone makes the album worth the $10 asking price.

Of course, some of the material on Twenty-Six and a Half doesn’t shine quite as brightly, but I’m seriously impressed with the way many of the male artists manage to coax a pretty solid Al impression out of their voices. His signature nasally croon doesn’t come easily to everyone, but one appreciates the effort. Actually, that’s a pretty good way to look at the whole record. It doesn’t always fire on all (Al?) cylinders, but the effort impresses. No wonder Al called it his “second-favorite album being released this month.” That’s a ringing endorsement if I’ve ever heard one.

You can get Twenty-Six and a Half on Bandcamp starting today, and check out more from Weird Al on his official website.

One Response to “Review: Various Artists, ‘Twenty-Six and a Half: A Tribute to Weird Al Yankovic’”