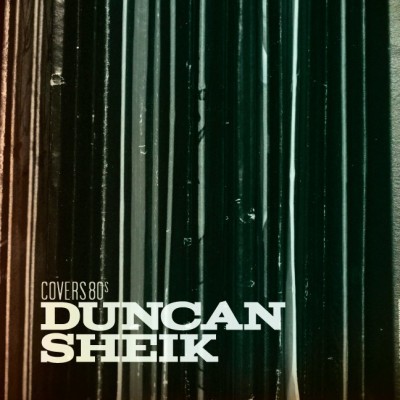 This is no John Hughes soundtrack compilation and if you’re looking for a “Walking On Sunshine” feel-good nostalgia trip, you’ll likely be disappointed. While a few big hits are represented, Sheik offers a deeper and somewhat darker journey back into his past. Although he grew up in New Jersey, Sheik does not include any American bands on Covers 80’s. He says that the litmus test for inclusion was “did I really, really care about it when I was 15 or 16?” Apparently what Sheik really, really cared about back then was the electronic, indie and New Romantic pop of the second British Invasion and Covers 80s benefits greatly from Sheik’s choice of source material.

The musical arrangements here are quiet and minimal. The main instrument, of course, is Sheik’s exacting and powerful voice. He keeps the tempos down and the songs seem to almost drift into each other. This is both a strength and weakness of Covers 80s. The album has a comfortable and consistent feel to it, yet the originals seemingly would allow for more varied expression. Seven songs in, when Tears For Fears “Shout” finally rolls around, you’re rooting for Sheik to finally allow himself to “let it all out.” He doesn’t.

Still, Sheik manages to capture the feel and mood of each cover very well even if he’s holding some of those guilty pleasures at bay. His choice of the dark “Kyoto Song” from The Cure was refreshing given that the original album had brighter options such as “Close To Me” and “In Between Days.” Japan’s “Gentlemen Take Polaroids” may be the surprise inclusion of the collection and a worthy tribute to David Sylvain’s nearly forgotten band. Rachael Yamagata makes a significant contribution adding backing vocals and depth to all but three songs. It’s hard to imagine the Thompson Twins “Hold Me Now” without the great blending of voices from the original and the cover really works well in the second half of the song where Yamagata is highlighted a bit more.

With most albums it’s easy to pick a few favorites and dismiss a couple songs as filler. With Covers 80s no single song stands out over another, but nothing misses the mark either. Sheik delivers a solid tribute to the bands of his youth and will be appreciated by both casual and serious fans of eighties “New Wave” and Brit pop.