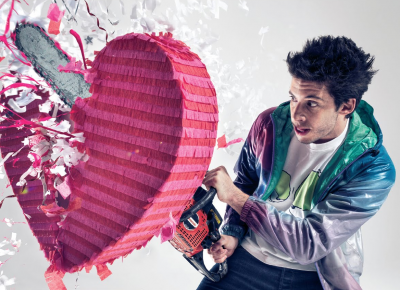 London-based singer and rapper Example is no stranger to covers or Radio 1’s popular Live Lounge, having previously taken on Katy Perry, among others, during his appearances on the program. This week he visited with a timely cover of the Arctic Monkeys single “Don’t Sit Down Cause I’ve Moved Your Chair.” Example’s rendition of the awkwardly-named track coincides with the release of the Arctic’s fourth album, Suck It and See, which hit the shelves this week.

The original “Don’t Sit Down” sticks with the desert rock formula that the Sheffield band concocted with Josh Homme’s help on Humbug, and Example maintains that vibe in his version. Unfortunately, he does little more than maintain it, producing a cover that doesn’t add much to the original and is in many ways inferior. His backing band does a fine job reproducing the heavy rock of the track, but Example’s vocals are a weak spot – pitchy, mechanically phrased, and lacking the subtlety of delivery that Alex Turner has perfected. The matchup between a rapper and the Arctics is interesting in theory, but this cover fails to achieve the sinister richness of the original. See if you agree below.

Check out more from Example at his website or Myspace.