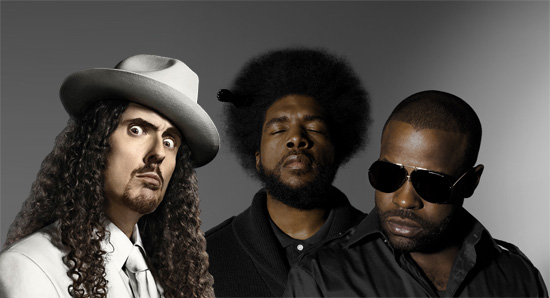 “Weird Al” Yankovic drops by Late Night with Jimmy Fallon tonight in support of his new album Alpocalypse, but not just as the musical guest. No, the entire episode, he’ll be sitting in with the Roots! From the sound of it, the parody-hop dream team have been having some fun preparing. During soundcheck, they jammed on an instrumental cover of, appropriately enough, Madvillain’s “Accordion” and it’s worth a listen.

Sure, it’s only four chords here repeated endlessly, but Questlove’s boundlessly enthusiastic shoutouts bring a smile to your face. “This is historical!” he cries. He later tweeted “greatest day of my time here at @latenightjimmy” and it sure sounds like it. Check it out at Quest’s Swift.fm account.

One Response to “Believe It: Weird Al and the Roots Join Forces on Madvillain Cover”