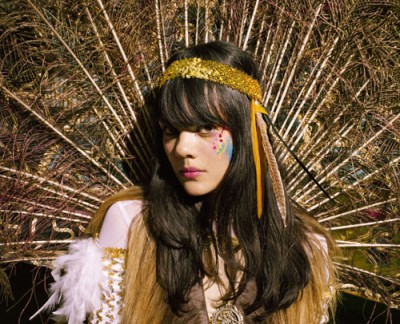 Bat For Lashes aka Natasha Khan is known for crafting haunting, shockingly catchy pop songs like “What’s a Girl to Do?” and “Daniel” (which was recently given the covers treatment by both Josh Reichmann and Paul Dempsey). Her live cover of 1950s pop sensation Johnny Mathis’ 1957 love ballad “Wild is the Wind” is no exception. Though the romantic standard has been covered by the likes of Nina Simone and David Bowie, Khan lends the song her own dreamy pop chops and makes a version unlike any before it.

Johnny Mathis’ song of deep, true love, featuring (in any other song) cheesy lyrics like “with your kiss/my life begins” has new meaning in the beauty and eeriness of Khan’s version of the song, performed with a string quartet at the Sydney Opera House. The rawness of her voice lends itself to the once-in-a-lifetime kind of love Mathis describes and creates an almost otherworldly version of a song describing an extraordinary love. Check it out below.

Bat for Lashes – Wild Is the Wind (Johnny Mathis cover)

Find out more info about Bat For Lashes on her website.