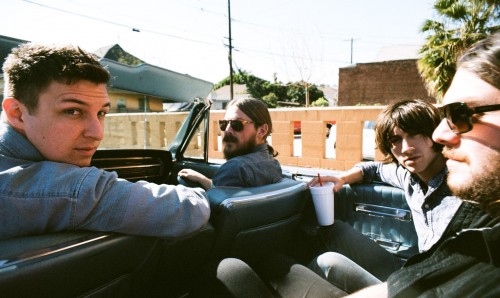 Since parting ways after their collaboration as The Last Shadow Puppets, Alex Turner and Miles Kane have been productive. Turner has released two albums with Arctic Monkeys, including this month’s Suck It and See, while Kane resigned as frontman of The Rascals to pursue a solo career, releasing his debut album in May. The duo reunited earlier this month when Kane opened two Arctic Monkeys gigs. Now they’ve crossed paths yet again with the Arctics’ new cover of “Colour of the Trap,” the title track of Kane’s new record.

Drawing inspiration from relaxed new tracks like “Piledriver Waltz” and “Love Is a Laserquest,” Turner produces a low-key acoustic take on Kane’s single for French radio station OuiFM. While all the Monkeys performed for most of the session, this particular tune finds Turner on his own. His subtly phrased vocals, framed with bare bones guitar, provide a great centerpiece for this cover of his friend’s track. (via WAWSTSF)

Check out more from Arctic Monkeys at their website or MySpace.