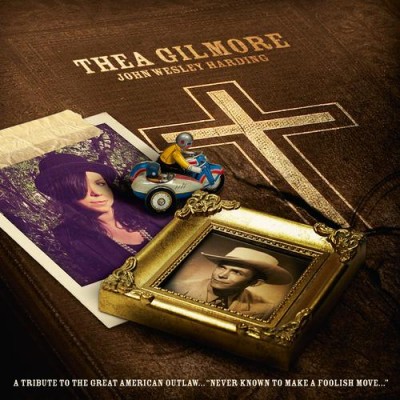 Few albums sound as different from their predecessor than Bob Dylan’s John Wesley Harding does from Blonde On Blonde, but then the two albums were the product of very different men. The Dylan who recorded Blonde seemed on top of his game, lauded round the world as a genius and full of the narcissism and perceived invincibility that goes with that sort of attention. The Dylan of Harding, felled by a motorcycle accident in July 1966 and subsequent time out of the spotlight, had a more mature, reflective tone, aware of the brevity of life and how it could all disappear in an instant. A stark contrast to the psychedelia peddled by most major artists the year of its release, Harding caught the attention of Jimi Hendrix, who immediately recorded covers of “All Along the Watchtower” and “Drifter’s Escape.” Over the years, critics and fans have come to regard Harding as one of Dylan’s best.

Now, to celebrate Dylan’s 70th birthday, Thea Gilmore has revisited Dylan’s 1967 acoustic masterpiece in its entirety. She planted the seed of this project in 2002 when, asked to contribute to a compilation of covers to accompany an issue of Uncut magazine, she recorded a critically-acclaimed version of Harding’s “I Dreamed I Saw St. Augustine.” Participating in a tribute concert in honor of his Bobness in Glasgow earlier this year, she “decided I had to do something” to mark his “three-score-and-ten moment.” So she reconvened the lineup with whom she recorded “Augustine” — guitarist Robbie McIntosh (The Pretenders, Paul McCartney) — drummer Paul Beavis and bassist (and husband) Nigel Stonier, for one week this past February.

Their result succeeds on almost every level. Covering an entire album poses a certain amount of risk: often even the best albums have weaker tracks that covering artists tend to gloss over in favor of the better-known tracks. Gilmore manages to avoid this trap. First and foremost, she chooses an album with few weak links, but secondly she provides as much, or even more, attention to the lower profile tracks as she does to the ‘hits.’

Take “Dear Landlord,” for example. Gilmore doesn’t radically makeover the song, but thoughtfully strips the clip-clop beat, adding a more personal and desperate tone. “The Wicked Messenger” becomes a short, frenetic folk-punk song with loud drums and blazing guitar and harmonica solos. Robbie McIntosh’s guitar drives both the country-funk of  “Down Along the Cove” and the wide open interludes of “As I Went Out One Morning,” demonstrating the remarkable virtuosity and versatility on which he built his career as a sideman’s sideman.

The album’s only real weakness comes on the closing track, “I’ll Be Your Baby Tonight.” What should have been a pleasing country jaunt suffers from a strange, slow half-time beat that makes Gilmore struggle with her lyrical delivery at times. Earlier on, “All Along the Watchtower” almost falls victim to a similar odd rhythmic approach, but builds past it and the arrangement grows on you. Note too that her version of “Watchtower” is not simply a rehash of Hendrix’s, but a fresh approach to the song.

Overall, Gilmore has lived up to the promise she held out all those years ago with her cover of “Augustine.” She has crafted an album that draws attention to some of the lesser known nooks and crannies on Harding, offering you a new perspective on a record you thought you already knew inside out.

John Wesley Harding Tracklist:
01. John Wesley Harding
02. As I Went Out One Morning
03. I Dreamed I Saw St. Augustine
04. All Along The Watchtower
05. The Ballad of Frankie Lee and Judas Priest
06. Drifter’s Escape
07. Dear Landlord
08. I Am a Lonesome Hobo
09. I Pity the Poor Immigrant
10. The Wicked Messenger
11. Down Along the Cove
12. I’ll Be Your Baby Tonight