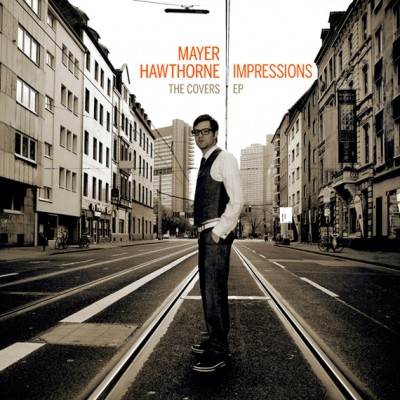 Mayer Hawthorne didn’t crash onto the scene the way other soul revivalists did in 2008. Sharon Jones and Raphael Saadiq cast big shadows that year that proved difficult for other soul revivalists to get out from under. Still, Hawthorne managed to get his voice out there and people tuned in to listen found themselves impressed. “Just Ain’t Gonna Work Out” became a stylish indie hit, shepherding many nerdy white kids into the enticing world of soul music. Hawthorne’s debut album A Strange Arrangement managed to propel him onto the scene, but this new covers EP will give Mayer Hawthorne the sticking power he needs to become an indie powerhouse. If nothing else, it will carry fans over until the long-awaited release of his follow up album How Do You Do this fall.

On Impressions, Hawthorne’s artistry shines. There is as much to say for his taste as there is for his talent. He mines hard for some of the obscure tracks and makes peculiar pairings harmonious with the better-known songs. Refusing to be pigeonholed as a Motown do-over, Hawthorne makes some unexpected choices on this EP. Furthest from his established sound is Chromeo’s “Don’t Turn the Lights On.” This slowed-down and eased-up cover is in the same vein as Ryan Adam’s take on “Wonderwall,” which the Gallagher brothers, in an unusually charitable moment, claimed was better than Oasis’s original. Originally written as a love song to a ghost, Hawthorne’s “Don’t Turn the Lights on” matches the instrumentation with the lyrics. It is “form follows content” perfected. The yearning in his voice and dashes of twilight-zone piano convey the heartbreak better than the original.

Other unexpected choices include Jon Brion‘s “Little Person” and Steve Salazaar’s “Fantasy Girl.” These songs serve as soft buffers in between the other high-energy tracks. While the former was featured on a famous soundtrack (Charlie Kaufman’s Synechdoche), “Fantasy Girl” is unexpected mostly because it’s incredibly obscure. So obscure, in fact, that it can’t even be found on YouTube. In his write up, Hawthorne speaks fondly of the original artist, whose career was cut off by his early death before it even got started. This fondness translates into wistful singing atop lyrical instrumentation.

The Isley Brothers’ “Work to Do” sounds more in line with what we usually hear from Hawthorne, but deserves two tips of the hat for their perfect cover construction. On “Work to Do,” Hawthorne gives his band room for experimentation, and they take the song in a new direction ripe with piano riffs and drum solos. As a result, the song flexes its funk and hits a little harder than the original.

The Festivals’ “You’ve Got the Makings of a Lover” and Electric Light Orchestra’s “Mr. Blue Sky” are the only songs on the EP that are perfect reflections of the original. In both cases though this is quite alright. Since The Festivals are a little-known Northern Soul band, they deserve to have their song brought to the lime light in its original version. ELO, though much better known, may get some of that ever-desirable indie cred that hipsters showered Hall & Oates with two years ago through Hawthorne’s energetic upper.

With this covers album, Hawthorne makes clear that every song benefits from a little injection of soul. Both babyboomers and members of Generation Y will enjoy this EP. Hawthorne puts a forward-thinking spin on some old-school classics and a retro spin on some new indie favorites. The anticipation for Hawthorne’s sophomore album just grew that much greater.