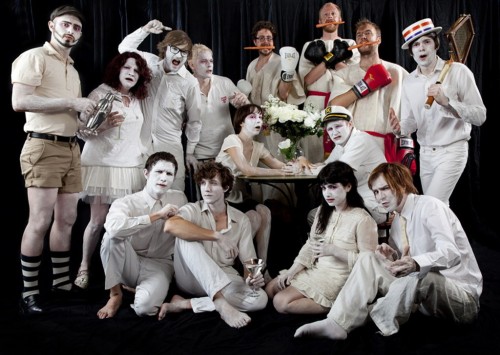 Ever since we saw the A.V. Undercover list, we’ve been wondering who would cover the White Stripes’ “Fell in Love with a Girl”? Surely it couldn’t be as bad as Joss Stone’s gender-swapped version, right? Right (thank god), but mostly because it sounds kind of like the original.

The band: Of Montreal, known more for their psychedelic theatrics than garage-rock loyalties. Still, they keep it basic – despite playing with twice as many performing as played on the original. “I love garage stuff,” frontman Kevin Barnes said though, wearing a knit cap and purple scarf. “Big Iggy and the Stooges fan.” He then tells an endearing fanboy story about meeting Jack White (sort of) that’s worth the price of admission alone.

Though it doesn’t stray far, we do enjoy Brian Poole’s mirroring the chorus vocals on guitar. And, whaddya know, the song now has a bass line. Watch the video below, via the A.V. Club.

One Response to “Watch: Of Montreal Stomp Through Rocking White Stripes Cover”