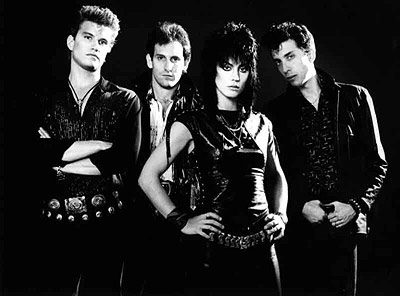 For any ex-punks who find Joan Jett’s abrasive attitude and hard-hitting drive too much for tired ears, this is just the cover for you. Indie band Babbling April (named after Graham Greene’s 1925 poetry book) released their eponymous debut album last month, and one track on it is an acoustic “cover/adaptation” of Joan Jett’s classic rocker “Bad Reputation,” renamed simply “Reputation.”

In this cover, Babbling April creates a hypnotic, catchy tune that retains a surprising amount of the original’s momentum. True, the defiant lyrics sound a little strange counterpointed with the intricate harmonies and gentle atmospherics. What Babbling April absolutely does right, however, is turn a straight-up punk guitar attack into a lilting and beautiful piece of artistry. Turn Table Kitchen describes the effect as “softly shimmering,” and we can’t think of a better way to put it. They rework the lyrics a bit, but, far from breaking the cover’s spell, lines like “And I don’t give a damn how you define success/Measure me up I could really fucking care less” take the band to an emotional peak. If you like this sound, you should definitely check out the full album, which is packed with lots more of what makes this cover so great.

Check out more Babbling April at Facebook or Bandcamp.

One Response to “Not So Blackhearted: Babbling April Covers Joan Jett’s “Bad Reputation.””