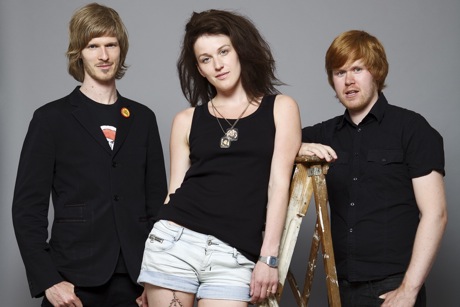 Heavy metal legend Ronnie James Dio lost his battle with stomach cancer one year ago today. A relatively late bloomer, he didn’t truly rise to prominence until he was in his mid-thirties; he served in Richie Blackmore’s Rainbow and Black Sabbath before fronting his own self-titled outfit. Now Swedish lounge metal band Hellsongs have released their version of Dio’s “Stand Up and Shout,” originally on 1983’s Holy Diver.

If you haven’t heard Hellsongs before, get ready for a surprise. The band specialize in toned-down covers of metal classics, replacing speed with contemplation, raging electric guitars with quiet acoustics. Singer Siri Bergnéhr delivers the lyric with an organic, soulful voice, and you can actually clearly understand the words! We thought they were through, but it seems they had one loose end to tie up. Originally recorded for possible inclusion on last year’s Minor Misdemeanors, “Stand Up” remained unfinished until now. Download it below, then read their full note about the track at their website.