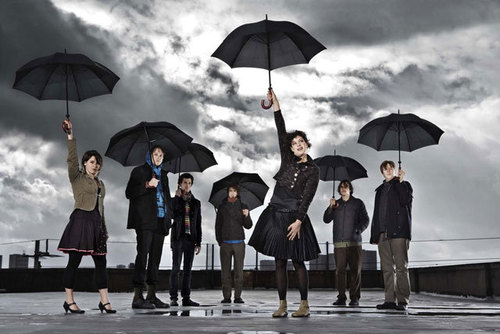 Every band likes to end gigs with their biggest song. Arcade Fire must have a hard time drafting a set list, since every one of their songs is massive, but for a long time they’ve been sending off fans with the truly epic “Wake Up.” It’s a grand, soaring song that really requires the dedication of all eight Arcade Fire members. However, it’s also such a gem that other artists can’t help but try to take it on, though most of them tone it down to a more manageable acoustic number. The results are mixed – covering Arcade Fire can be a daunting task – but the five artists below prove up to the challenge.

1. Paolo Nutini put aside his trademark brassy cheer for a simple, acoustic version of “Wake Up” on BBC Radio Scotland. The result is nowhere near as grand as the original, but Nutini’s raspy, emotive vocals let him do what so many covers of the song cannot – capture the intense emotion of the original.

2. Chicago-based Will Phalen chose a similarly sparse arrangement when he covered “Wake Up” in 2009. Ukulele and harmonica might seem like incongruously cheerful (and strangely matched) instruments to take on the track with, but Phalen’s weary vocals lend it some gravity, with the harmonica filling in where the “ohhs” of the chorus should be.

3. Hamilton Trading Company may seem like an Arcade Fire clone (12 Canadian musicians, including one who plays a glockenspiel), but the convivial chorus of musicians who make up the constantly-changing band follow Phalen and Nutini’s example. Their take on “Wake Up” is surprisingly low-key, framed with guitar and hand claps. However, the choir-like size of the group gives it a full sound that’s true to the original. HTC gives the track forward motion by letting different members pick up the vocals, creating a warm, collective atmosphere.

4. A final acoustic cover comes from KA4, a group of young musicians assembled by nonprofit organization Kollaboration. Like HTC, their cover is a warm blend of vocals; they produce some polished, dreamy harmonies. The only downside: they introduced the track via a saccharine, inexplicably slow-mo video.

5. John Legend and The Roots collaborated to produce arguably the best-known and most original “Wake Up” cover. Legend’s nuanced vocals are the centerpiece of the track, which speeds up and brightens the original with soul-infused Roots instrumentals. Legend and The Roots make the track shout “Wake up!,” crafting one of the more unusual interpretations – particularly amongst its mostly-acoustic cover competition.