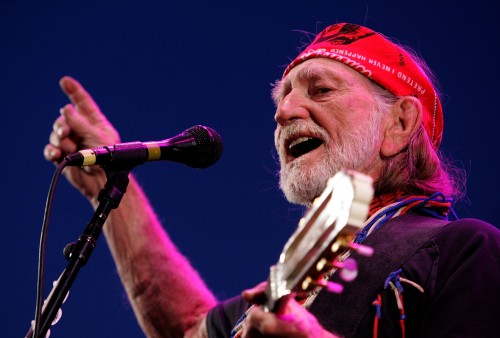 Well, old Willie just keeps on truckin’, doesn’t he? A singer, songwriter, actor, political activist and truck stop owner, Willie Nelson turns 78 years old today. He achieved songwriting success in the late ’50s writing songs for Ray Price (“Night Life”), Faron Young (“Hello Walls”) and perhaps the most famous country song of all time, Patsy Cline’s “Crazy”. He broke through as a performer in 1975 with the release of his album Red Headed Stranger and cover of “Blue Eyes Crying in the Rain.”

For someone so accomplished as a songwriter, Nelson always seems to have space in his repertoire for a cover or two. That includes including a pair of Jimmy Cliff tunes on his 2005 reggae (??) album Countryman – and don’t forget his recent album of Ray Charles tunes reviewed here. And if you haven’t heard his incredibly poignant version of “Rainbow Connection” (yep, Kermit the Frog), you should make a point of seeking it out. Despite several marriages, occasional health problems, troubles with the IRS and brushes with the law (the authorities and he differ on their opinion regarding marijuana), Nelson shows no signs of slowing down as he approaches the big 8-0. So happy birthday to you, Willie, here’s some non-country covers of your tunes to help you celebrate!

B.B. King paints country blue with this powerful rendition of Nelson’s “Night Life,” originally made famous by Ray Price, with whom Nelson toured as a bassist in the early ’60s. King pulls no punches; a fantastic horn arrangement, blazing guitar and rousing vocals communicate the ambivalence of someone who knows that his life “ain’t no good life, but it’s my life.”

In Al Green‘s hands, Nelson’s wistful letter to an old lover “Funny How Time Slips Away” sounds more like a seductive attempt to charm her back into bed. But then again, anything sung by Green in the early ’70s sounds like stylin’ music.

Punk rock and outlaw country, while completely different on the surface, share a similar outsider ethos, with many a punk rocker freely experimenting with the genre in some form or another (think John Doe of X, Social Distortion, or Mark Lanegan). Here former Dead Kennedys frontman Jello Biafra shares his contribution to the 1996 Nelson tribute album Twisted Willie.

The most country-cliché track title of the bunch comes courtesy of Cake. This track, from their breakthrough 1996 album Fashion Nugget, replaces pedal steel with a horn, was the last track .

Okay, had to include some country! Matthew Houck, aka. Phosphorescent, released an entire album of Nelson songs in 2009 that included this ode to the inevitable. Check out the drunken sounding, Bob Dylan-style harmonica during the instrumental breaks, the perfect touch.