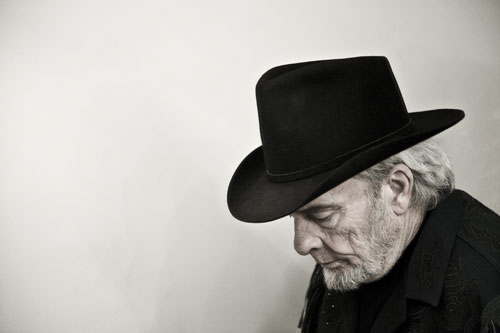 Thirty-eight number one country hits, numerous Academy of Country Music awards, three Grammy Awards and somewhere around 10 billion studio and live albums (give or take): Merle Haggard has accomplished a good deal in his 74 years on this planet. He has experienced his share of hardships as well – “hard living,” four marriages, heart problems and recent lung cancer – but he still continues to release albums and tour constantly. As an originator of both the Bakersfield sound and outlaw country, Haggard came upon the scene at a time when country music had drifted far from its roots, with overwrought, schmaltzy ballads dominating the charts. Along with Willie Nelson, Johnny Cash and Waylon Jennings, he helped inject a much-needed dose of reality, likely rescuing the genre from a permanent descent into the adult contemporary wilderness.

To celebrate his 74th birthday today, we’ve assembled a collection of covers to demonstrate his influence beyond the borders of traditional country music. Though the originals all date back to the ’60s, don’t let that fool you, Haggard continues to write and release great music, including last year’s I Am What I Am. Check out the covers below.

The Everly Brothers’ sweet harmonies sound a little odd on this tune with such dark subject matter. The narrator, now in prison for “life without parole,” laments that he was unable to live up to his poor, hard-working mother’s efforts to steer him right.

In 1968, Gram Parsons replaced David Crosby in The Byrds, finding the band rudderless. He quickly steered them towards traditional country music, and they released Sweetheart of the Rodeo, featuring this Haggard track. The album spurred a country rock revival in the ’70s and influenced bands like Wilco, The Jayhawks and Ryan Adams in the 1990s’ alt-country movement.

Though more known as psychedelic rock and jamband icons, the Grateful Dead were huge country fans. Here they join The Beach Boys (talk about an odd couple) in a somewhat ironic live version of Haggard’s inadvertent redneck anthem.

For those of you who thought that John Fogerty went into hibernation from the dissolution of Creedence Clearwater Revival until 1985 and “Centerfield,” here’s a track from his excellent 1973 album of country covers, The Blue Ridge Rangers. He presents a subdued, respectful take on this Haggard tale of heartache and woe.

L.A. punk rockers X found it impossible to release a country album in 1985 under their own moniker, so created The Knitters instead. The album featured their cover of this classic Haggard tune, sung by John Doe. Doe revisited country on his album Country Club, backed by one of the best live bands ever: the Sadies.

2 Responses to “They Say It’s Your Birthday: Merle Haggard”