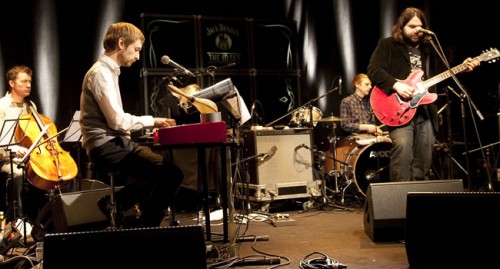 On April 1, cover fans missed something incredible – or, at least, those of us who couldn’t be in Dublin did. Neil Hannon (of The Divine Comedy) covered Vampire Weekend‘s self-titled debut album in its entirety, with the help of Cathy Davey, Romeo Stodart (of The Magic Numbers), and the band Jape. The show was organized by The JD Set, a Jack Daniels venture into the music scene of the British Isles.

Hannon describes the album as “short, snappy, and gorgeous” and “an ingenious marriage of indie pop, African rhythm and classical harmony.” The ensemble takes only a few creative liberties, such as an occasional acoustic guitar, harpsichord, or tweaking of vocal harmonies, but what’s lacking in any technical change is more than made up for in the live-band energy of the sessions and the freshness of new voices on VW’s tunes.

Regrettably, videos of the actual show are of dodgy quality (at best), but the JD Set filmed great clips of the reheasel sessions. Watch clips of “Cape Cod Kwassa Kwassa,” “Mansard Roof,” and “Bryn” below, then check out the full-length ones, along with “Campus” and “M79” at the JD Set website.

Check out more from these artists on MySpace: The Divine Comedy, Cathy Davey, The Magic Numbers, and Jape.