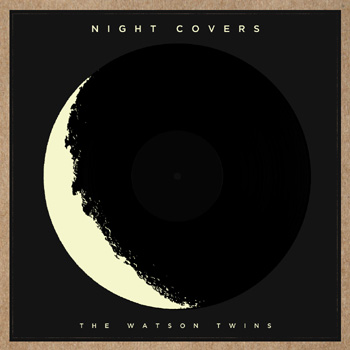 Though identical sisters The Watson Twins first broke through as backup for Jenny Lewis on Rabbit Fur Coat, they’ve stepped into the spotlight on their own with three albums of ethereal indie-folk. They follow up last year’s Talking to You, Talking to Me with the eclectic, literally-named EP Night Covers. The Kentucky-born duo revealed an intriguing range of artists in the tracklisting when they chatted with Cover Me last week. On Night Covers, they create a cohesive mini-album from diverse source material, staying true to the style established on their previous releases. The sisters told Cover Me that they “ha[d] a lot of fans asking for recordings of [live] covers” after playing the tracks on tour, which prompted them to take the pleasant, restrained, and occasionally quirky arrangements on Night Covers into the studio.

Almost every track on the EP showcases the sisters’ effortless harmonies, beginning with opener “You Showed Me.” They used this Turtles track as a giveaway to promote the album, and it serves as an accurate representation of what Night Covers offers. Leigh and Chandra Watson don’t revolutionize most of the songs they cover – “You Showed Me” stays relatively true to the original. However, their incorporation of graceful alt-country flourishes makes the covers recognizably theirs without feeling contrived.

They follow “You Showed Me” with a drifting version of PJ Harvey’s “Angeline,” one of the EP’s strongest offerings. Chandra has praised the track’s “great visual darkness,” noting, “our music is semi-dark as well so we gravitated towards that right away.” It’s an astute comment on why “Angeline” works so well as a Watson Twins song. Lyrically and atmospherically, it’s a great fit for their haunting, melancholy vocals. The album goes from strength to strength as “Angeline” transitions to a measured, bluesy take on the oft-covered Bill Withers track “Ain’t No Sunshine.” “Sunshine” is an especially quiet, introspective moment on an album that’s pretty relaxed overall, but the jaunty harmonies of the final chorus save it from monotony and make it a commendable addition to the lengthy list of “Ain’t No Sunshine”s already out there.

Night Covers falters when the Twins stray into straightforward pop. Their take on Eurythmics’ “Here Comes the Rain Again” is disconcertingly sunny in the midst of an otherwise reserved set of songs, and despite being another showcase for their flawless harmonies it drags slightly. Sade’s “The Sweetest Taboo” suffers from similar problems. “Taboo”’s inclusion comes from a desire to bring “something that was more soulful…really centered around the rhythm section” to the album. It achieves these goals, but the jazz-tinted arrangement feels awkwardly shoehorned into the EP when contrasted with moments like “Sunshine” and the flawless “Angeline,” where the original genre lends itself more naturally the Twins’ style.

The album gets back on track with the Black Keys’ hit “Tighten Up,” a genre departure that succeeds beautifully. The Twins concede that “it was probably one of the more challenging songs we did,” and as a result it’s their boldest effort. They slink through the track, foregoing the swagger of the original so completely that it’s almost unrecognizable.

“Tighten Up” is a great closer because it reminds listeners that the Watson Twins are having fun on Night Covers. When they talked to Cover Me, they shared anecdotes about packaging and promoting the album with everything from hand-drawn artwork to embroidery done by their mother. It’s a labor of love for the fans who requested the recordings, and who will likely be thrilled by a covers EP that sounds like an original Watson Twins record. They consistently marry their own sound to work from a well-selected set of diverse artists, and individual standouts like “Tighten Up” and “Angeline” more than carry the weaker moments.

Night Covers arrives April 18. Get the album and check out more about The Watson Twins at their website.