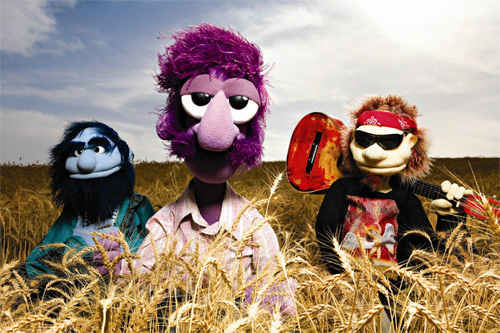 Not only do the puppets (and their rock-and-rolling puppeteers) have their own TV show, consistently littered with good covers of an eclectic array of songs, but they apparently play gigs throughout Israel. The puppeteers and creators of the show are American Israelis Ari Feffer, Micha Duman, and Ami Wiesel. These guys, despite providing the talent, are not the band. The band consists of frontman Red Orbach and his bandmates Poncho and Lefty – all brilliant nods to the 20th century Americana of their cultural roots, references as varied as the Boston Celtics and a Townes Van Zandt song. There’s also a singing mouse named Phillip, but he doesn’t seem to get much notice.

The show is littered with guests, all of whom seem to be prominent Israeli pop/rock musicians. In the videos below, we’re introduced to acts like Marina M. Blumin, Aviv Gefen, and Efrat Gosh. The set of videos is kicked off with the most adorable cover of M.I.A.’s “Paper Planes,” cuteness courtesy of Phillip the mouse. They take a little bit of liberty with the lyrics, playing on the get high like planes element, and make the song much more folksy and country-fried than one might have thought possible. Phillip also takes the lead on a full-band cover of The Doors’ “People are Strange,” with Aviv Gefen guesting. They finish off the song with a brilliant display of something we can’t quite pick up from the covers alone – the fact that the show is hilarious in ways that can’t be ruined before you watch it, ways that perfectly balance out the depth and seriousness of the songs they’re tackling.

The cover of Nina Simone/The Animals’ “Don’t Let Me Be Misunderstood” gives us a glimpse of the talent of the musicians behind the show, with some incredible soloing by Poncho, as well as a reminder that the show is, after all, broadcast in Israel, with guest star Shlomi Saranga helping balance the American English with some incredible Greek vocals. The guys – er, puppets – go Motown with Efrat Gosh on The Four Tops classic “Reach Out I’ll Be There,” putting a spin on the original as well as on their own style with a little bit of hip-hop flavor. While the genre switch doesn’t work as well for them as their usual rock and folk, the humor shines through with Red’s creepy listing of all the times he’ll be there and the following tangent on his own personal hygiene. As tends to happen, the jokes go downhill from there and we catch a glimpse of why the show gets billed as an Israeli South Park with singing puppets.

Last, but never least, is a beautiful cover of Van Morrison’s “Crazy Love.” We’re faced with a brief interruption early on from a woman talking on the phone in Hebrew, presumably spilling over from earlier in the show and strolling into the studio toward the song’s end. While this mildly distracts, it certainly doesn’t detract from the overall greatness of the cover. What’s more, we’re given a whole new meaning to crazy love, as guest Marina M. Blumin looks like she’s about ready to marry an aging, hippie puppet who looks like a purple Jim Croce.

It’s hard to always know what’s going on plot-wise, as the show deftly jumps between English and Hebrew. Furthermore, most of the videos available online are of the covers, so it’s difficult to get much of a sense of the rest of the show. That being said – a) the covers are amazing; b) covers are what this whole site is about, so enjoy.

Check out more from Red Band on MySpace.