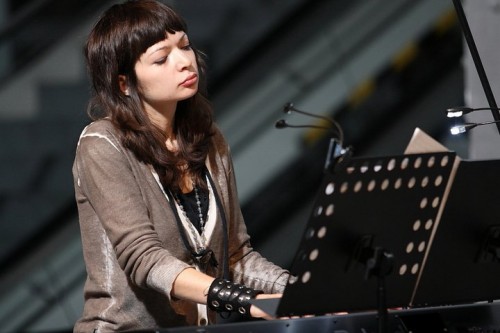 Vika Yermolyeva, who goes by the moniker vkgoeswild on YouTube, trained classically and has received numerous awards for her playing. Now based in Iceland, she also harbors a not-so-secret love of metal, which she expresses by showcasing her solo piano arrangements of songs by bands such as Metallica,  Nine Inch Nails and System of a Down. Her stunning results illustrate the beauty of the piano as a musical instrument in the right hands: an instrument that combines percussion and melody better than all others, allowing for an incredible range of expression.

• Check out at the aforementioned “Raining Blood” below, a video that needs to be seen to be believed. Her use of the left hand and piano rolls captures the frenetic energy of the original better than you could possible imagine.
• Few bands combine melody and thrash as well as Metallica and her cover of “Battery” loses little of the song’s power, arguably sounding even more dramatic.
• On System of a Down’s “Toxicity,” she uses the piano’s dynamic range to communicate the contrast between the light and shade in the track with an electrifying result.
• She takes The Ramones‘ “Blitzkrieg Bop” from the gritty streets of ’70s New York and turns it into a track that could easily soundtrack a barroom fight in an old western.
• Finally, on Pink Floyd‘s “Echoes,” she shows her talent for arrangement, successfully translating a multi-layered psychedelic masterpiece into a grand solo statement.

As a special bonus, we’ve included mp3s of each track from her website for your enjoyment.Check it all out below.

Vika Yermolyeva – Toxicity (System of a Down cover)

Check out more from Vika Yermolyeva on her website.

5 Responses to “On The ‘Tube: Vika Yermolyeva”