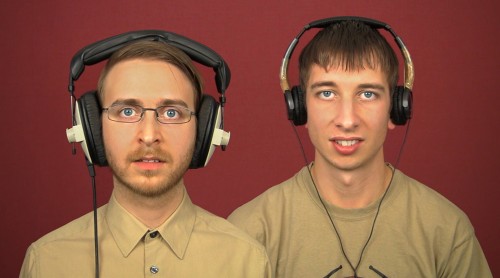 YouTube musician Brett Domino is a superstar. Yes, that guy up there with the glasses. Oh, you didn’t know? Well, let him be the first to tell you. “We do get a lot of attention now that we are hugely famous,” he tells Cover Me. “We’ve had poems written about us, pictures drawn of us, marriage proposals. I signed a lady’s bosom once after a gig in Bangor.” Brett’s collaborator, Steven Peavis, gets his fair share of groupies too. “Quite a lot of people seem to comment on the YouTube videos confessing that they have a crush on Steven,” says Domino. “I think it must be his strong nose.”

If viral videos aren’t your thing, though, you may not have heard of Brett Domino and his sidekick Peavis. Domino posted his first music video on YouTube in January 2008 and became an Internet sensation with his kickass keytar and stylophone skills covering popular hit songs. In the spring of 2009, the Brett Domino Trio (with Peavis and friend Mitch Hutchinson, not featured) tried their luck on Britain’s Got Talent. Though they didn’t make it to semi-finals, their deadpan nerdiness successfully confused Simon Cowell.

The reality is that Brett Domino is actually the alter ego of Rob J. Madin, a comedian with a B.A. from Leeds College of Music and a killer instinct for creating original cover songs with odd instruments such as the KORG Monotron, ukuleles, accordions, recorders, kazoos, empty bottles, loose change and even iPhone music apps. Below, we feature five of his videos from YouTube, including their Hip Hop Medley, a somewhat instructional how-to on using the stylophone beatbox. Domino makes it look easy as pie to mess with such a contraption, and when asked how he came to use it, he makes it sound equally easy: “I got a couple (stylophone beatbox) for me and Steven. We played around with them one afternoon in my mum’s conservatory and ended up coming up with a medley of our favorite hip-hop songs.” And just like that, over a million hits on YouTube and counting.

Also below is Domino’s cover of  Lady Gaga’s “Bad Romance,” a hilarious but danceable and ironic spoken-word number that is a cross between William Shatner and The Streets. For those lovely lady fans out there, the duo pound out Prince’s “I Feel For You,” complete with awkward dance moves. The tribute to Michael Jackson, with a medley of his hits played on Domino’s keytar, is astounding in both arrangement and execution.

Lastly, Domino and Peavis take on a Justin Timberlake medley featuring a ukulele and keytar solo that will rock your socks off. Timberlake himself loved the video so much that he re-posted it on his website. We asked Domino if, now that he is “hugely famous,” he would be opposed to working with J.T. in the future? He said, “I’d love to work with Justin. He plays the keytar too (see his live shows), so I think we’ve got a lot in common. Failing that, we’re open to other collaborations. I’m looking into getting some guest rappers on future tracks. Someone like Jay-Z or Kanye. Or Will Smith.” With this kind of musical talent, we do believe this funnyman is dead serious.

Brett Domino – I Feel For You (Prince cover)

Brett Domino just released his first album! Buy it now on iTunes or Amazon or get more information on his website.