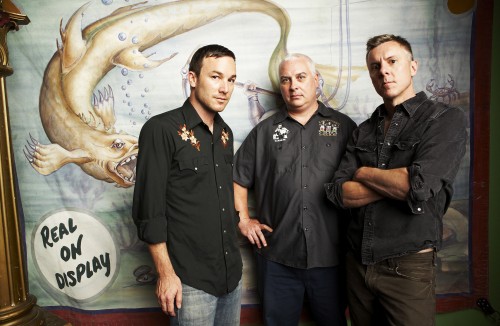 There has been a lot of focus on LCD Soundsystem lately due to the “band’s” final album and performance. Now that James Murphy is done putting out new music under the LCD moniker (with the occasional exception of a Franz Ferdinand cover), the best a fan can hope for is for some enterprising band to come along and breathe some new life into the old songs. For any bands thinking about trying, may I suggest using this Toadies cover as a blueprint?

If you haven’t been on top of your game, the last time you likely heard the Toadies in action they were creepily singing about a dark secret behind the boathouse in ’94. Aside from a short breakup, though, they have continued putting out new music under the radar, including a new one in 2010.

Even if you have been paying attention, you might be surprised to hear the laid-back sounds coming from the band in their Record Store Day cover of LCD Soundsystem’s “Someone Great.” They strip away the dense, swirling electronica of the original, but they don’t fill it with crunching guitars or minor key warbling. Instead, they hit you in the gut with… mandolin? Todd Lewis sings the words faithfully in the unaffected style of the original. With each plink of the mandolin, though, it feels like someone is tugging at your heartstrings. The dark confusion of the original sounds much lonelier and more primitive in this cover. For a band who built a legacy on being ominously menacing, they do a fine job capturing the heartache of a great song.