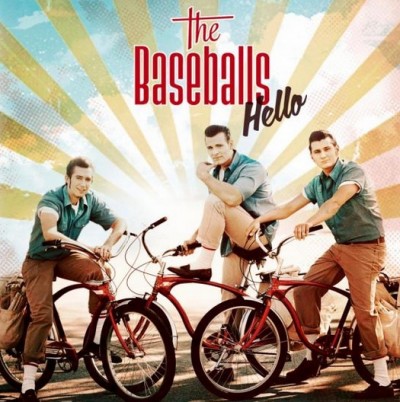 If you’ve never heard of Martin Solveig, you probably live in America. His singles chart list features hits all over the map, with one suspiciously empty column: the United States. His 2010 single “Hello” hit Top 20 in Britain, Australia, Canada, and a dozen more countries. Its peak position in the States though? 116th.

Though they model their whole appeal on 1950s America, the Baseballs come from Germany, so it figures they would include “Hello” in their latest disc of rockabilly covers of pop hits. Due in April, Strings ‘n’ Stripes includes covers of hits by Ke$ha, Pras, and Diddy-Dirty Money. Despite the fact that they seem to have based their whole look on John Travolta in Grease, they too enjoy far greater popularity in Europe than in the States.

The “Hello” video features the Baseballs doing what they do best: living out a 1950s fantasy. As always, they layer the Brylcreem on thick as they deliver papers in a nostalgic suburbia way more wholesome than Arcade Fire’s. Watch the video and peep the track list below (and read our review of previous release Strike! Back).