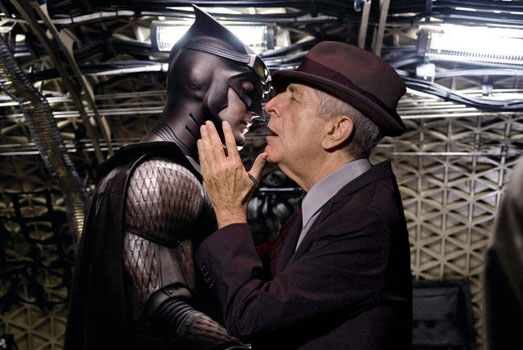 As anyone familiar with that scene can attest, of course, Watchmen — in keeping with its mostly retro soundtrack — employed the original Leonard Cohen track from 1984’s Various Positions. In fact, that instance marks one of the only major uses of the original recording in a mass-media production. Thanks to Shrek, The O.C., X Factor and a host of others, though, the song’s become inescapable via its many covers. Jeff Buckley, Rufus Wainwright, k.d. lang and more have all had their say on this one. In a 2009 interview with Jian Ghomeshi of The Guardian, Cohen revealed that he’d felt sympathy for a review of Watchmen which asked for a moratorium of “Hallelujah” in popular culture. Quoth Cohen: “I think it’s a good song, but I think too many people sing it.”

Too many indeed. This very site has posted six new covers of the song in the past year. Wikipedia’s disambiguation page for the word “hallelujah” refers to the tune as “a song by Leonard Cohen, often covered.” Cover licensing site Limelight ranked it as the seventh most covered song last year, just above “Moon River.” In 2008 the blog Confused of Calcutta attempted to compile a list of all the major artists who’ve covered the song and stopped at 107. So if Cohen says “stop,” should we listen? No one can doubt the song’s oversaturation, nor can they miss the universal cringe when another cover of the song surfaces (though clearly that hasn’t changed many musicians’ minds). But is re-doing the song the most awful thing ever?

First off, let’s state the obvious: “Hallelujah” might remain unknown if not for its cover versions. In that same interview with The Guardian, Cohen noted that his record label didn’t even want to release Various Positions, in part because of songs like “Hallelujah.” This was a song in which few had faith, pardon the pun. It took John Cale’s 1991 performance for a Cohen tribute album to really jump-start its popularity; Cale’s version informed most of the notable covers to come (including the titanic recording by Jeff Buckley) and gave the Shrek movie its most recognizable song (although Rufus Wainwright replaced Cale on the hit soundtrack album, it was Cale’s cover that graced the film). Cale even sculpted his recording with help from Cohen himself, who faxed Cale extra lyrics he’d never performed. Notably, Cohen has delivered Cale’s version of the song on subsequent tours.

Of course, Jeff Buckley really brought notoriety to the song with his 1994 cover. Especially after Buckley’s death in 1997, his “Hallelujah” proved inescapable. To this day, one could make a fair bet that people think of his version of the song more than any other. A slough of appearances in television shows and movies has only helped Buckley’s case, and many have ranked among the best covers of all time. He even made it to the top of Billboard’s Hot Digital Songs chart in April 2008, almost 15 years after the song’s initial release. Where most popular music loses its steam over time, it seems Buckley’s “Hallelujah” only builds momentum.

Without covers, then, Cohen’s song may never have been embraced by the world at large. Numerous renditions, Buckley’s in particular, have touched many fans unaware of Cohen’s original work (just think of all those Watchmen haters). Cohen, too, benefits: the blog OMG, Music! reported that he stood to gain one million pounds in royalties from the song’s performance on British show X Factor in 2008.

Still, that doesn’t answer the question of whether we need more covers. There, we can be a little more tentative and say “maybe.” “Hallelujah” has clearly become a standard, a four-chord ditty on which singer-songwriters can cut their teeth. Not all these budding musicians need to release their covers, of course. But every once in awhile, a great one slips out. Cover Me’s reported on versions by Brian Fallon (of Gaslight Anthem) and Samm Bennett, both of whom transform the song’s melody into something that suits them. Doing so allows them to find new honesty in the tune and deliver a performance both powerful and unique — two words that often can’t be applied to the song’s covers.

History indicates more covers prove worth it in the end. The same question of whether we need more versions of the song might understandably have been posed after Buckley’s version cemented itself as King of Covers. Yet that would have denied the world Rufus Wainwright’s reading, as well as much of his subsequent fame. Who knows; maybe in a few years another relatively unknown singer-songwriter will score again with a different interpretation. If we take “Hallelujah” more as a blueprint than a song, then we can imagine infinite ways to build on it. Just because no one’s discovered any new ones in a while doesn’t mean they’re not out there.

As with all covers, the best of “Hallelujah” will rise to the top. This particular case just makes it a little tougher to separate the wheat from the chaff. Uninteresting covers of the song don’t really hurt anyone, though; we’re free to ignore them as we will, and the good covers provide a novel enough experience to at least partially make up for it. As far as a moratorium on the song’s use in popular culture, I think I can get on board with that. In fact, can we just forget that scene in Watchmen — hell, the whole movie — ever happened at all?