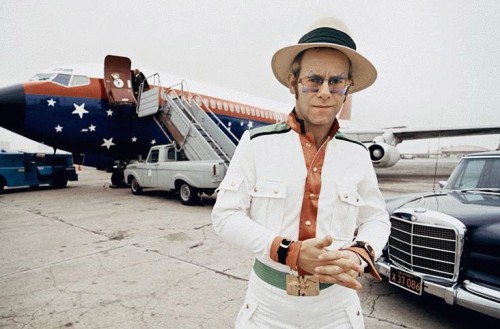 Elton John is one of those artists who transcends generations and genres. From rock to pop to a Diamond-certified soundtrack (The Lion King), his eclectic music has universal appeal. More than his talent on the piano or vocals, his showmanship adds an inescapable aura to his songs. How else could he get away with the lyrics to one of his biggest hits, “Your Song?” To bust out a line like, “If I was a sculptor, but then again, no,” with no further explanation takes a Miles Davis level of cool. Only a master could make forgetting the color of his lover’s eyes somehow a tribute to them (although it is a sly way to make sure the song applies to multiple partners).

In short, “Your Song” is a dangerous song to cover. In the wrong hands, it’s pure schmaltz. Then again, hewing too close to the original means competing with perfection. Amid the multitudes of failures, thankfully, there are a handful of standouts.

1. With a dark and choppy piano accompaniment, Ellie Goulding takes this simple love song and turns it into an almost desperate plea. Her thick British accent and fluttering voice mix wonderfully with the lyrics, although you probably aren’t focusing on the lyrics when you hear her gorgeous singing.

2. We love to feature under-the-radar talent here, but sometimes it takes a professional to do it right. While Rod Stewart’s vocals follow the blueprint laid out by the original, he is backed by a pretty decent combination of piano, organ, fiddle and guitar.

3. Moulin Rouge! Yes, really. I know my indie cred is treading on thin ice here, but try to control your eye rolls for just long enough to actually listen to this song. Removed from the travesty of the movie it’s actually a nice tribute, culminating in an orchestral crescendo that could only happen in an overblown musical.

4. The only American on our list, ‘70s R&B crooner Billy Paul adds a little soul to the mix and it works surprisingly well. While the backup singing is cheesy, the foot-tapping beat and ad-libbed vocals really infuse the song with a feeling of praise. By the end you might not even remember who he’s covering.

5. The last track is both the most loyal to the original and, at the same time, the most off-the-wall. The piano copies Elton’s version note-for-note, and aside from the addition of some heavier percussion later on, many listeners might not notice much musical difference. That is, aside from the fact that The Streets’ Mike Skinner rattles off the lyrics in his usual Cockney drawl. It’s hard to tell whether he’s paying the ultimate tribute or lampooning the whole thing. In the end, this one might end up being more controversial than the Ewan McGregor version.